NORTHMOOR, Mo. — The metro’s most notorious auto repair shop and haven for illegal tow trucks is now the focus of a criminal investigation.

Most of the unlucky people whose cars end up at Northstar are often towed here by illegal towers who chase wrecks, strong arm stranded motorists and then demand massive amounts to get their car back.

But Northstar Auto Body is no typical repair shop. 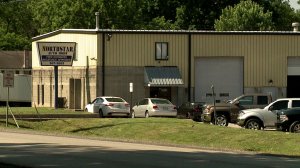 A source told FOX4 that Northstar actually owns many of the tow trucks that bring cars there — even though those towers operate under a variety of names like 24/7 Tow.

Cory Bauer will never forget the 24/7 tow truck that stopped after her crash to supposedly help.

Bauer said she told the tower she had already called 911, but he told her police were busy and wouldn’t be arriving for hours. She now believes that was a lie.

“They were very insistent that we leave the scene and meet up at the McDonald’s on Prospect,” Bauer said.

Once there she said she felt coerced into letting 24/7 tow to (you guessed it) Northstar Auto. Her tow bill was about $1,700. That’s about five times the cost of a normal tow.

Northstar is owned by Walt Bryant, a man one law enforcement officer referred to as “The Godfather” of illegal towing in Kansas City. Bryant didn’t return FOX4’s phone calls for comment, but in the past has always maintained his innocence.

“At some point we have to kind of draw a line in the sand,” Bradley said. “We know this behavior is happening. We need to do something to help stop it.”

Some Northstar victims tell FOX4 they’re grateful the Missouri State Highway Patrol is involved because they believe Kansas City police have, for too long, allowed illegal towing to thrive.

To be fair, KCPD hasn’t completely ignored the problem.

Late last month, a KCPD investigation resulted in tow lot owner Jay Bloodworth being charged with 31 felony counts of forgery all linked to what prosecutors say were illegal tows.

Despite that, critics say bad towers continue to prowl the streets of Kansas City and police too often ignore them.

Both state and local laws state that, in most cases, tow trucks can’t pull up on crashes and offer assistance. Tow trucks must be summoned either by the driver or police.

Kansas City police insisted to FOX4 that they follow the law, but others disagree.

“I know that on a daily basis the Kansas City, Missouri, Police Department allows vendors to solicit from the scene,” said Nate Pare who manages Kansas City’s tow lot. “It’s common knowledge. It happens every day.”

Benfer, who has always maintained to FOX4 that he runs an honest business, works so closely with Northstar Auto that police found Benfer’s mail sitting on a desk there.

That partnership sickens people such as Bauer who have been stuck with gigantic tow bills.

“To be confronted with the fact that people are willing to do really despicable things to make a living and to take advantage of people in their worst moment is abhorrent,” Bauer said.

Yet in Kansas City it happens every day.

Kansas man gets drivers license after years of problems

‘Value them Both’ amendment could see potential recount

Lee Greenwood to perform at KS Speedway on Sept. …