“It just collapsed,” Sheila Rodriguez said as she pointed to a porch roof that was so rotted it landed on the front step of a dilapidated home in her stylish Johnson County neighborhood.

This latest problem was really no surprise for a house with so many city violation notices they hang on the front door like Christmas lights.

What is surprising is who owns the house: NFL star Tony Richardson.

He bought the house in 2002, a few years after he started playing for the Chiefs and became affectionately known by troves of fans as T-Rich.

After Richardson moved to more pricey digs, he rented the home. But for the last three years, no one has lived here.

With each passing year, the house falls further into disrepair. 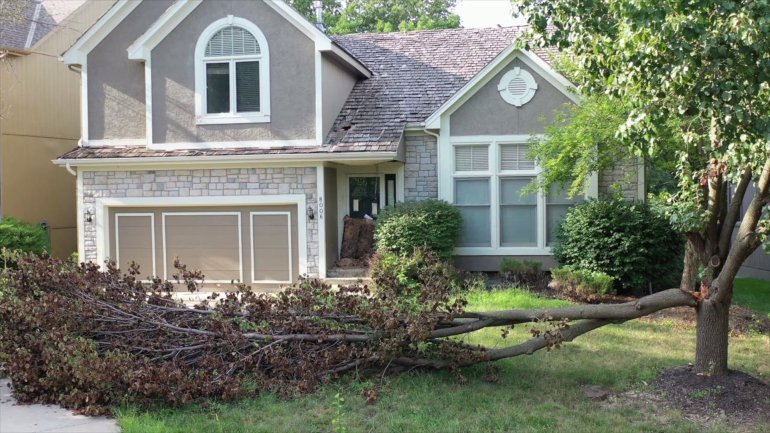 Problem Solvers first did a story about the troubled property two years ago on Super Bowl Sunday. That story seemed to make a difference — or so neighbors thought. Immediately after it aired, Richardson contacted them.

“He was very apologetic and said he was going to take care of everything,” Rodriguez said. “Well that didn’t happen. They were broken promises.”

One neighbor recently shot video of a raccoon disappearing inside a large hole in the roof.

Frustrated homeowners have started a Facebook group called “T-Rich to T-Rash.” They post updates from city inspectors and photos.

It’s a shocking reminder of a sports icon who made more than $10 million paying for the NFL and is in the Kansas City Chiefs Hall of Fame.

Richardson now lives in New York. He collects an NFL pension and last year told a magazine reporter that he had a part-time gig with the New York Jets. 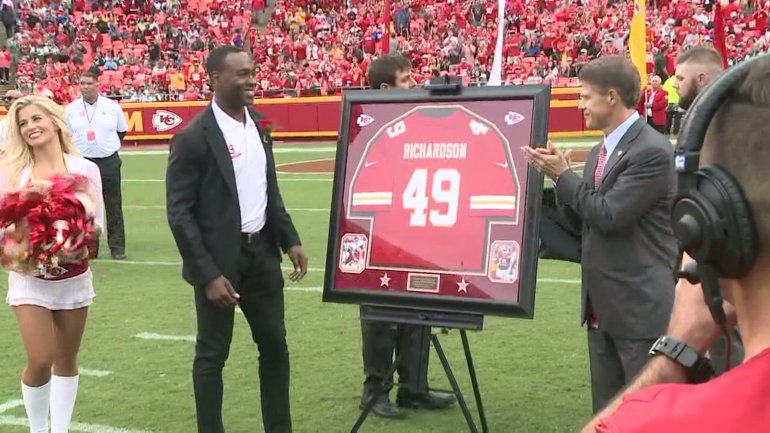 Despite that, he owes more than $30,000 in Kansas property taxes and thousands in city fines. The city said he hasn’t shown up for court dates.

Neighbors said they have tried everything to get Richardson to take care of the property.

“We tried to reach him by social media sites, by email, by phone, texting, you name it,” Rodriguez said.

The only time he responded is when she threatened to contact FOX4 Problem Solvers.

He wrote her claiming he had no idea the property was so bad. All she had to do was call him, and he’d take care of it. She did. Repeatedly. He never answered the phone.

Rodriguez is also frustrated that neither the city nor the county has done anything but slap Richardson with fines and fees that he, in turn, ignores.

“If it was anyone else, I think something would have been done before now. But because of who it is, I think he has been given a pass,” Richardson said.

Overland Park City Councilman Faris Farassati said he believes every citizen — no matter their sports prowess — is treated equal by the city. But Farassati agreed that the city has to start getting tougher on Richardson.

“At some point we have to take action,” Farassati said. “It’s not just putting a sticker on someone’s door and leaving.”

Overland Park city officials told neighbors they’ve been doing everything they legally can to solve the problem.

However, the partial collapse of the porch roof has strengthened the city’s hand. It’s possible the house could now be considered a dangerous
building and boarded up — even possibly torn down.

Meanwhile, Johnson County has filed suit to seize the house for having more than three years in unpaid property taxes. However that process can take at least a year.

So what does Richardson have to say about all this?

We have no idea. We called him repeatedly on the cell phone number he recently provided to neighbors. But, like his neighbors, we also have never heard from him.

According to public records, this isn’t the only problem Richardson is facing.

The IRS slapped him with a $300,000 lien last year for unpaid federal taxes. He also has a nearly half-million dollar judgment against him in Minnesota where he once owned a home while playing for the Vikings.

Close
You have been added to Working for You Newsletter

KC woman recovering after having stroke while driving

KC woman recovering after having stroke while driving