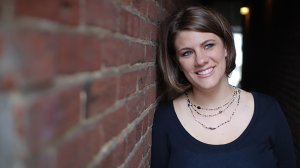 NASHVILLE, Tenn. — Progressive Christian author Rachel Held Evans died in Tennessee on Saturday after spending two weeks in a hospital for treatment for an infection and brain seizures. She was 37.

Sarah Bessey, a writer and friend of Evans’, says she died in Nashville early Saturday morning, surrounded by her husband and friends.

Bessey said Evans challenged the evangelical community by addressing sexism and racism and “championing voices of people who have been marginalized in the church,” including the LGBTQ community.

Evans was a resident of Dayton, Tennessee. Her books include “Faith Unraveled,” ”A Year of Biblical Womanhood,” and “Searching for Sunday.” Evans’ website said she wrote about “faith, doubt and life in the Bible Belt.”

Evans served on former President Barack Obama’s Advisory Council on Faith-Based and Neighborhood Partnerships. She spoke at churches, conferences and universities around the country.

Dan Evans wrote on his wife’s blog April 19 that she was placed in a medically induced coma after her brain experienced seizures during treatment for an infection. Doctors tried to reduce swelling in her brain Friday but could not save her.

“I can’t imagine a world without her voice,” Bessey told The Associated Press in a phone interview. “She was leading in a space where a lot of people in the church were silent.”

Evans was the mother of two children. Funeral arrangements are pending.

KANSAS CITY, Mo. -- Protests that have resulted in vandalism and lawless behavior have prompted a group of urban core advocates to begin speaking out. Neighborhood leaders want peaceful changes to make Kansas City a better place to live.Leaders in the urban core say they know that if police stop them, they should comply with all lawful orders and they should receive humane treatment in return. Longtime Kansas Citians say…

NEW YORK -- The show will be paused. At least, that's the message coming from leaders and artists in the music business as part of a movement being referred to as Blackout Tuesday. Music executives Jamila Thomas and Brianna Agyemang spearheaded the effort to shutter normal business operations on June 2 via their #theshowmustbepaused initiative. A Twitter account tied to the group appears to have been created on Sunday, amid…

Officer shot in the head in Las Vegas on life support