KANSAS CITY, Kan. -- Two people now faces charges of kidnapping and aggravated endangerment of a child related to the car theft and frantic search for the three-year-old missing girl left inside on Wednesday.

Wyandotte County District Attorney Mark Dupree held a news conference to announce charges against Tyler Letzig, 28, and Karri Reich, 29. They were both charged with kidnapping, aggravated endangering a child and theft.

Dupree says Letzig and Reich stole a car at a Kansas City, Kan., gas station after the girl's mom's boyfriend ran inside to buy a cold drink for the child. The little girl was asleep in the car and he left her there while he was inside. That's when a woman got in the driver's seat and sped away from the Valero at 7th and Riverview.

"Our children are our most sacred treasure. They are the very essence of our being as parents. This man entered into a gas station, leaving a child in a car and it took less than two minutes. This two minutes turned into the longest two hours of this child's mother's life," Dupree said.

"This is my plea to the parents in this county and around. If you do not have time to unbuckle your child and take them in the store with you, leave them at home with a sitter. It is too hot for the child to be in the car, but above that, we have too many knuckleheads who are looking and lurking to take a vehicle not caring if your child is in the car. We are the protectors of our children," he continued. 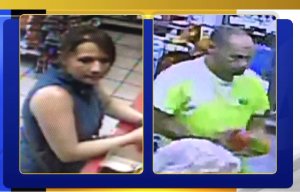 Police say the woman, who was not yet in custody Friday evening, was caught on surveillance video buying items in the gas station, then walked outside and handed her male accomplice, whom police say is Letzig, some items.  Then, they say, she hopped in the silver Ford Focus. Police say Reich quickly drove off with the little girl still in the back seat, and they say Letzig took off in another direction down 7th Street in a white commercial truck.

Police cordoned off the Valero gas station, quickly released surveillance of the two suspects to the media, and shortly after investigators say the driver of the missing silver car's cell phone pinged several miles away in Leavenworth County. She was found safe near the abandoned vehicle in a rural area of Tonganoxie.

"I will tell you that it was a wooded area. It was a lot of tall weeds up to one's waist. It was not a lot of housing around for miles," Dupree said of the place where the girl was found. "This child, 3 years old, if she would have gotten out of the car and roamed could have easily been fallen in a potential hole, could have been attacked by some of the

wild animals that are out in the area, could have went and hid somewhere and for miles there are no people, and so our law enforcement could have never found her."

At the time of the car theft, Reich was out on bond and awaiting sentencing that was scheduled for Tuesday, July 18th, after pleading guilty to meth possession and fleeing from custody. Letzig had served time behind bars for criminal damage in Johnson County, Kan.

Dupree said he and investigators are still determining if the boyfriend will face charges for leaving the girl in the car.

"It is my hope that no child is ever taken away from their parent again by the misstep or mistake of the parent leaving their child unattended. It is not okay and it is not right and as a parent you need to give your child better and more support and protection," said Dupree.

Watch the full news conference below:

ST. LOUIS COUNTY, Mo. – Rescuing animals is just part of the job when it comes to protecting and serving a community. One dog owner had some helping hands Monday from the Black Jack Fire Protection District and the St. Louis County Police Department.

It all began Sunday night, when Rusty Payne, a 12-year-old chihuahua, chose to wander off after being let outside.

Elliot Page, best known for his role in the Oscar-nominated film Juno, announced on Tuesday he is transgender.

“Hi friends, I want to share with you that I am trans, my pronouns are he/they and my name is Elliot," he wrote on Instagram. "I feel lucky to be writing this. To be here. To have arrived at this place in my life."

U.S. students falling behind in math during pandemic, study finds

Tips to protect against ‘porch pirates’ during the holiday shopping season