OLATHE, Kan. — A father and his girlfriend are in jail after being charged with horrific allegations of abuse against the man’s 5-year-old adopted son.

The abuse was so bad, the child weighed as much as a 2-year-old should weigh. If the abuse and neglect hadn’t been detected, some say the child could have been on the road to death.

The victim’s adoptive father, John Alvin Carter, and his girlfriend, Elizabeth Francis, have been charged with child abuse and aggravated child endangerment. 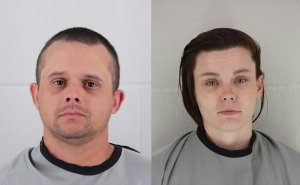 “It appears that he had every kind of abuse imaginable, physical sexual and emotional,” said former DCF Deputy Director Dianne Keech, who isn’t involved in this case but reviewed the court record.

Besides being dangerously underweight with a distended belly, doctors at Children’s Mercy Hospital note the 5-year-old victim had bruises all over his body, cuts on his head and a perforated bowel due to blunt force trauma.

Court records say when confronted, both first denied the abuse, but then Francis flipped, blaming Carter for being physical with her and the child.

The boy also said Francis would pull his hair and put him in a cold bath.

“Those who cannot protect themselves, we even have a higher duty to help them in these types of situations, and in these cases, small children are the most vulnerable,” Johnson County District Attorney Steve Howe said.

Because his office is prosecuting this case, Howe could not talk about this specific case. But he said there isn’t a set pattern in child abuse cases, which makes early intervention more difficult.

“That would be my piece of advice to everyone. Don’t just call DCF if you feel it is really important,” Howe said. “Also call your local law enforcement agency.”

How Carter came to adopt the boy is unclear, but Keech said since many adopted children have come from traumatic situations or feel abandoned, they are considered special needs and more at risk for abuse.

Carter doesn’t have a criminal record in Johnson County, but Francis does. Among other things, in 2013, Francis was convicted of domestic battery. Sources say she also has a history with DCF.

“Someone with a history of DCF involvement is positively correlated as a risk factor for abuse neglect in the future.” Keech said.

The abuse and neglect of this 5-year-old boy was so bad, the prosecutor on the case filed a motion for upward departure. That means if Carter and Francis are found guilty, the D.A.’s Office plans on asking for a sentence that goes beyond the maximum for these crimes.