RICHMOND HEIGHTS, Mo. — Protesters Friday turned their anger over the police shooting death of unarmed teen Michael Brown on the St. Louis Galleria Mall, forcing the mall to shut down temporarily on the busiest shopping day of the year. 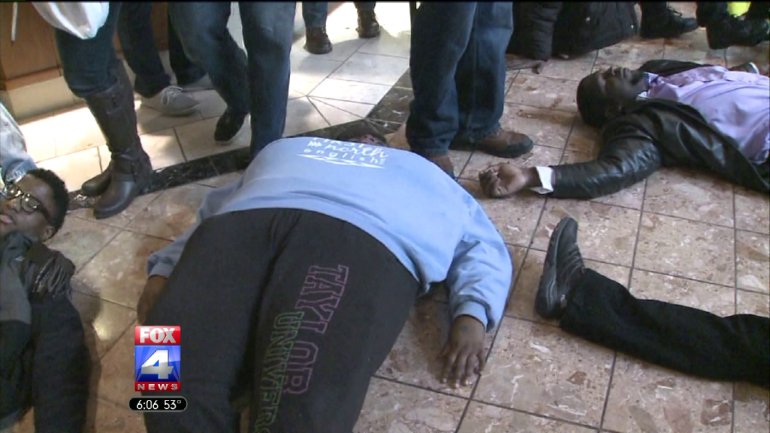 Protesters lied down on the floor of the mall for four and a half minutes of silence to represent #MikeBrown‘s blood on the ground, in what organizers called a “die-in”. The movement was organized on social media using the hashtags #NotOneDime, #Blacklivesmatter and #Stlblackfriday.

One mall worker said demonstrators threatened to throw chairs in the food court before the National Guard moved in.

In Oakland, California, major delays were reported Friday at the BART West Oakland train station because of “civil unrest,” according to a service advisory. There was no service into or out of San Francisco.

Protesters chanted “Which side are you on?” and “Black lives matter” as BART police officers attempted to remove them from trains. Some demonstrators chained themselves to handrails on the trains, forcing police to remove the handrails. About a half-dozen demonstrators were arrested.

The disruptions came as Ferguson streets were largely deserted after a Thanksgiving that mixed kindness with sadness, heartbreak with hope.

Gone were the blazing buildings, set on fire during the most contentious nights of protests this week. So were the stone-faced National Guard troops, standing in a single file, facing angry protesters.

Missouri Gov. Jay Nixon announced on Friday that approximately $625,000 in zero-interest loan funding would be made available to businesses affected by the unrest in Ferguson and some surrounding areas.

“Communities that have been impacted by civil unrest should know that the State of Missouri is committed to providing the resources necessary for them to recover and rebuild,” Nixon said in a press release.

Though troops remained on duty, residents — instead of hurling insults — spread some goodwill, bringing National Guard members turkey and other treats.

“We just all have to make sure that we are taking care of one another,” Terry Pimmel told CNN affiliate KSDK. “That is our mission.”

Bundled-up volunteers painted murals on plywood covering gaping holes where windows once stood, a stark reminder of vandalism of stores a few days ago.

“We came out here because we thought that anything would be better than just blank plywood,” Avi Ryan, 13, told CNN affiliate KMOV.

And for Brown’s family, it was the first Thanksgiving without him. Relatives gathered at his father’s house, where an empty chair sat at the dining table.

A grand jury’s decision Monday not to indict Wilson sparked protests in the St. Louis suburb that spread from coast to coast.

Protesters urged supporters to boycott shopping on Black Friday. And if they did shop, they were told to take their money to black-owned businesses, some of which they listed on social media.

Supporters had been urged to boycott major retailers nationwide.

About 300 protesters gathered outside Macy’s in New York for a march Friday afternoon. Carrying signs with messages such as “We will not be silent” and “Ferguson is everywhere,” about a dozen protesters entered the department store and were followed by police. Others marched north toward Times Square.

Organizers said they were protesting everything from the Ferguson grand jury decision to racial profiling. At least seven protesters have been arrested on various charges, including impeding traffic and disorderly conduct, according to police.

Ferguson has postponed its annual Northern Lights celebration, which was scheduled for Sunday. The event includes a parade and the lighting of a Christmas tree.

“The decision was difficult, but ultimately, all involved felt postponing the event is the most appropriate course of action at this time,” the city said in a statement.

Policing in a post-Ferguson U.S.

Attorney General Eric Holder will travel to Atlanta on Monday to hold the first in a series of meetings focused on race relations and policing in minority communities, according to CNN Justice Reporter Evan Perez.

“For the overwhelming majority of people who just feel frustrated and pained because they get a sense that maybe some communities aren’t treated fairly or some individuals aren’t seen as as worthy as others, I understand that and I want to work with you,” Obama said on Tuesday.

Holder plans to have about five of these meetings across the nation in the coming weeks.