Dozens marched to police headquarters to protest what they call “decades of misconduct” by the KCK Police Department.

“This will only begin to fix a problem caused by decades of corruption and negligence. We will stand to see this through,” said Rev. Dr. Bobby Love of Second Baptist Church in Olathe.

It was a specific call to action as they marched around City Hall and straight toward police headquarters. 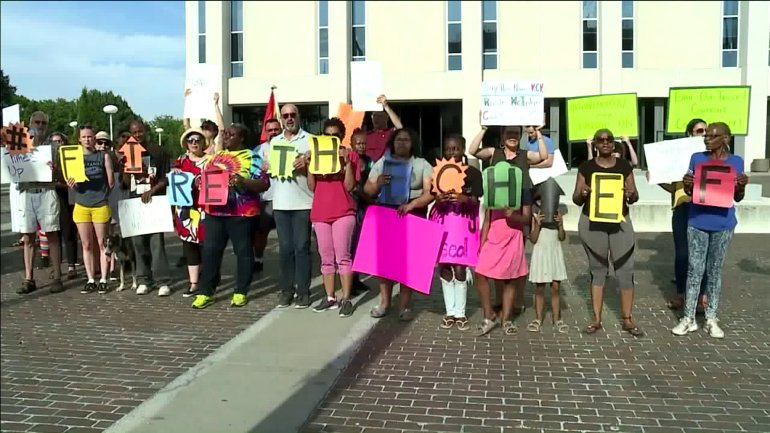 Organizers said it has been a year and a half since a lawsuit was filed, claiming Golubski extorted sexual favors from black women and coerced them into providing false information.

The lawsuit was filed by Lamonte Mcintyre and his mother shortly after he was exonerated following a 23-year sentence for a murder he didn’t commit.

Most recently, a female cadet within the department claims she was wrongfully terminated. She said she was fired after she filed a complaint that led to charges against a KCK police officer for alleged sexual battery.

While Zeigler isn’t named in either lawsuit as a defendant, his name is mentioned frequently as a former partner of Golubski, who played a major role in alleged departmental corruption.

Protesters on Wednesday night said Mcintyre’s story and claims are not an isolated case.

“My brother John Keith Calvin has been in prison for 17 years for a crime he did not commit,” said Eric Calvin who’s brother, John, is currently serving time for a  felony murder conviction.

Speaking before the crowd, Calvin said now is the time for the truth to be known — and everyone to come together.

“If not now, then when? We are scared, but we are here anyway,” one protester said.

The protesters also calling for city leaders to allocate funding for a special hotline so other victims of misconduct can call and come forward.

KCK police responded to Wednesday’s event, saying in part, “The Kansas City Kansas Police Department has already made statements regarding the lawsuit filed against the department and will not be making any further comments.”

The statement also says there’s already a hotline for complaints. The chief said further comments will be addressed through legal channels.