GLADSTONE, Mo. -- It was gone in a heartbeat.

One retail customer from the Northland says her purse was stolen while she shopped at a popular store, and police have photos of the accused thief.

That purse belongs to Joyce Perkins, 73, a great-grandmother who lives with a series of medical conditions. Perkins says she was shopping at the Walmart store at 72nd Street and Antioch on Saturday afternoon. Perkins says she wasn't feeling well, and she took a seat on one of the store's benches while taking her medication.

By the time she could pick up her pocketbook, she said a thief had stolen it. She says her eyes were off the handbag for no more than 10 seconds.

"I didn't have a clue until I bent down to get my medicine out of my purse," Perkins said.

Joyce Perkins and her husband, Paul, were shopping, when Paul went to purchase a drink for his wife. That's when Joyce noticed a man sitting beside her, a Caucasian man dressed in a white shirt and plaid shorts.

"I went to get in my purse to take my medication and it was gone," Joyce Perkins said.

Store security photos, which were given to FOX 4 News by police, show that man walking out of the store with Perkins' purse, which, according to police, he'd taken from underneath Joyce Perkins' bench. On Thursday, July 7, Paul Perkins told FOX 4 the purse snatching suspect was in custody. 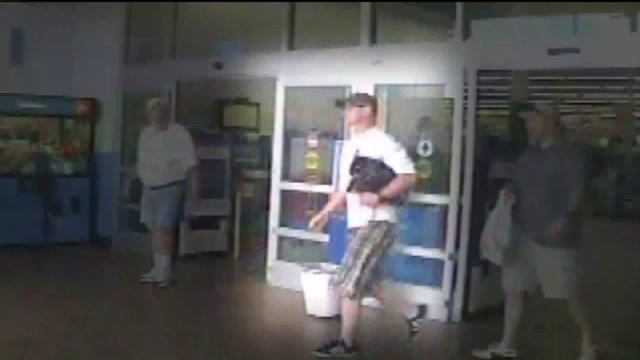 "I still didn't have my bearings yet so I couldn't chase after him. If I had, he wouldn't have gotten out of the store with my purse," Joyce Perkins said.

Once the retired factory worker realized she'd been robbed, she was furious.

Joyce Perkins says she's canceled her credit cards, which were stolen with the handbag, but medicine and keepsakes that were inside are gone, too.

"Two things I hate the worst in the world is a thief and a liar," Paul Perkins, 75, said.

"He didn't look like that type of person. Usually low-lifes are something you can pinpoint. This one, I didn't pinpoint."

"I didn't think it could happen to me either, but it can," Joyce Perkins added.

If you recognize the man in those photos, please contact the Crimestoppers TIPS Hotline at (816) 474-TIPS.