KANSAS CITY, Mo. — Rats are taking over parts of the metro, and many people who live in Waldo say the rat problem is getting out of control.

“The window from my kitchen looks down onto my yard, and you can see them,” KCMO resident Adriene Norton said. “I thought they were rabbits at first because they’re so big, but you can see them just walking around in your yard.”

The health department said the number of complaints is way up. 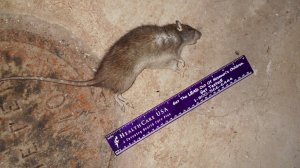 “We do have, actually, a very large problem in Kansas City,” said Michael Swoyer, the rat control supervisor with the KCMO Health Department.

Swoyer said there are a number of factors for the increase in rats.

“There are people illegaly dumping,” he said. “There’s a lot of construction sites, people who leave out food, water and shelter because people leave things out on their properties and what have you that allow rats to nest underneath them,” Swoyer said.

According to the health department, the rat infestation problem in the metro has gotten so bad, they said the number of calls they’ve received over the last two years has nearly doubled.

Norton said her dog has made a game with the rats now.

“She sneaks out the door and then plunges off the porch to try to catch them, and occasionally she does,” she said.

Swoyer said many people think rats and mice are the same — but they’re not. He said rat droppings are much larger than mouse droppings.

“It’s always a health issue,” he said. “Rats do carry diseases, and they do cause damage to homes, rats’ teeth are actually harder than iron. The type of rats we have around here like to dig holes and like to be down low, so you want to check your basement.”

Swoyer said the mild temperatures keep them around longer, and there will likely be a lot more in the spring and summer.

“Rats can reproduce really quickly, so it’s best to get to the rat problem as early as possible,” he said.

But Norton is worried about safety.

“They’re gross,” she said. “One of my bigger worries is that the neighbors will poison one of them, and then my dog is going to run out and eat it.”

The Rat Control Program has hired an exterminator who will perform free rat control services to people living in single-family homes or duplexes.