RIVERSIDE, Mo. - A casino, a hearse, and medieval battle attire. A strange combination, but one that might have Ray County in the market for a new coroner.

Riverside police arrested Ray County Coroner Tom Polley last month. They say he was smoking meth inside a hearse in the parking lot of Argosy Casino, after he said he’d just dropped off a body. Investigators also say there was also a suit of armor involved.

“The facts are a little unbelievable. It's just one of those things that I've seen and heard that you just can't make that stuff up. You'd be surprised what you see, the decisions people make,” Riverside Sergeant Brent Holland said.

It probably started as a night out at the casino. But factor in a hearse, a glass pipe, a white substance, and a suit of armor, and according to the police report, you've got the facts surrounding a February evening for Polley.

Sgt. Holland said all employers expect a high standard of performance from their employees, especially someone who works for the county.

“This was a gentleman that was entrusted by the public and he just failed to do that in his personal life,” he said.

Police say Argosy security called Riverside police on February 25 to report "a male sitting in a white hearse, smoking a white substance out of a glass pipe."

The responding officer said Polley identified himself as the Ray County coroner and said he'd just dropped off a body. He then asked the officer if he'd like to see a "suit of armor" that he bought at Marshall's. Police then searched the car and found a white substance that appeared to be meth, and a glass pipe, tucked inside the passenger seat.

“The gentleman just decided to admit to what he had,” Sgt. Holland said.

Officers took Polley into custody. He told them he'd confiscated the pipe and meth from an employee earlier in the week. He said he decided to smoke it because “it was there” and to "see what the deal was with it." 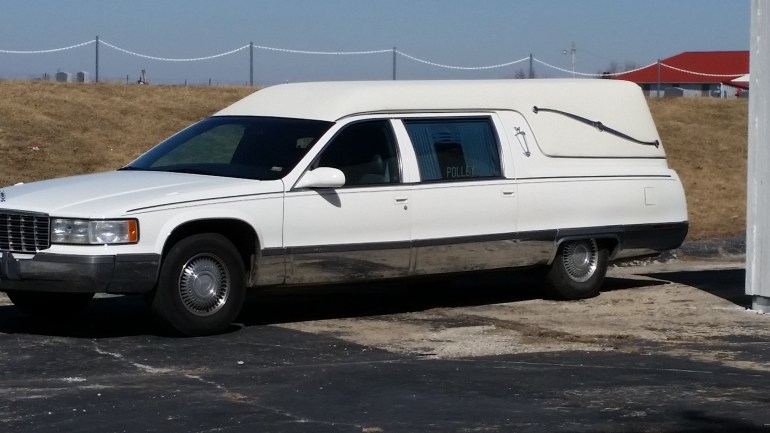 Fox 4 stopped by Polley's Funeral Home in Excelsior Springs and an employee told us he wasn't there. We also drove by his home but no luck in finding him. A Ray County spokesperson told Fox 4 she contacted Polley's office and was told he'd plan to turn in a letter of resignation Friday. As of our newscasts at 5 and 6 p.m., that letter hadn’t been received.

“He decided to make a poor decision and you know, he was caught,” Sgt. Holland said.

Polley was released that night with two citations. He faces two drug charges and has a court date set for April.

Police responded to a home near Seneca Ave. and Booth Ave. just after 4 p.m. after a victim reported he came home and found someone he does not know inside his house.

WASHINGTON — The Justice Department is quietly amending its execution protocols, no longer requiring federal death sentences to be carried out by lethal injection and clearing the way to use other methods like firing squads and poison gas.

The amended rule, published Friday in the Federal Register, allows the U.S. government to conduct executions by lethal injection or use “any other manner prescribed by the law of the state in which the sentence was imposed.” A number of states allow other methods of execution, including electrocution, inhaling nitrogen gas or death by firing squad.

NBA players who test positive for the coronavirus this season may have to miss nearly two weeks in some instances before being allowed to return to the court, the league told its teams Saturday.

That revelation was one of many in a 63,000-word document, a copy of which was obtained by The Associated Press, that explained some of the heath and safety protocols for the looming season. Preseason games begin Dec. 11 and regular-season contests start Dec. 22.

Disney to lay off 4,000 more employees amid pandemic

Local small business owners, employees hoping for another round of COVID relief to stay afloat

How long will you have to wear a mask? Here’s what the experts say