The Richmond School District won’t allow fast food to be eaten by students at lunchtime, as they have in the past. Parents in the district said the rule change is wrong.

As the school year begins in Richmond, parents said their school district needs to learn.

Classes at Dear Elementary School dismissed before 1 p.m. Thursday, and parents were buzzing about a Facebook post on the school’s social media page that mentions a new district policy that forbids students from eating fast food during lunch or during school hours.

“At the end of the day, we want to be able to decide on our own,” said Chris Swafford, a father of five kids in the school district. “I thought it was overstepping at its finest. It’s up to parents what their children eat.”

Swafford, who has two kids at Dear Elementary School, said there’s no difference between the lunches some kids bring from home and the fast food burger bags some parents send or deliver. Swafford told FOX4 his children have complained about the quality of the lunches at their school. 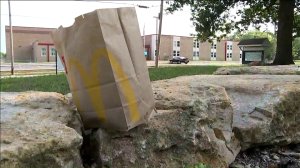 “Just because I don’t personally bring fast food to my children at school doesn’t mean other parents shouldn’t be able to do. Parents’ lives are busy. They sometimes have things going on, and sometimes, grabbing a 10-piece nugget from McDonald’s and taking it to their child shouldn’t be an issue,” Swafford said.

Some parents are posting support for the rule change on the Ray County Facebook community page, saying fast food delivery at school is a privilege some kids can’t afford.

“My kids take their lunch,” said Karen Williams, mother of two kids who attend Dear Elementary School, and although she opposes the new district policy, she sympathizes with others.

“Kids have been getting their birthday lunch brought to them since they were in kindergarten. I think it’s kind of silly, but I could see how other kids would feel sad if they didn’t have anything ever,” Williams said.

FOX4 reached out to the Richmond School District on several occasions Thursday. Superintendent Mike Aytes responded via email, saying staff members were too busy with the first day of school to comment on this policy change.