KANSAS CITY, Mo. — David Block, a Kansas City commercial real estate developer, garnered a lot of attention for his “We Eat Bird” T-shirt he wore to Game 1 of the American League Championship Series.

His love for the Royals, and for standing out a bit from the crowd, actually goes back decades. He attended every game of the 1985 World Series against the St. Louis Cardinals and displays the tickets in his office.

“They were $40 for the World Series tickets,” Block recalled.

He sat in the same seats behind the dugout where he still sits today, a photo shows him wearing a T-shirt to those games.

“Everyone around us is in a coat and tie, no shirts with Royals, very few Royals hats,” Block pointed out.

Fast forward 30 years and not much has changed. 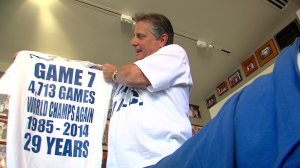 “This was Game 7 last year, and that’s how many games we had waited since had won the World Series,” Block said as he showed off one of his shirts with a number 4,713. 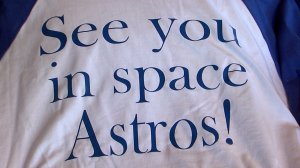 He started designing a new shirt for every Royals home postseason game last year, and now has enough to fill a suitcase. Many refer to the years he’s waited to see another Royals World Series, and the life events that have transpired since. Others poke a little fun at the team’s opponent including one that referred to sending the Astros back to Space.

“We barbecue the bird in Kansas City that will be the next one,” he said of his plans for a potential Game 6 versus the Toronto Blue Jays.

Block says usually he waits until game day before sending his assistant to one of two print shops at Landing Shopping Center.

“It’s a lot of scrambling and a lot of thinking, I’ve actually woken up in the middle of the night thinking what I might put on a shirt,” he said.

He’s glad to support his team in his own way, as he says these postseason runs have been huge for helping build a sense of community.

“People have said, ‘why don’t you wear your firm’s shirt?’ I go, ‘it’s not about the firm, it’s about the city, it’s about it’s our team, and the excitement it brings to everybody in our entire region,’” he said.

With the Royals now holding a 3-1 series lead following a 14-2 win in Game 4, Block says he hasn’t started thinking about sayings for shirts if they play the Mets or Cubs. He said he prefers to take things one series at a time.