The chances of emerging from a 300-mile race through Canada’s Yukon Territory amid temps as low as minus 40 unscathed? Not good for Roberto Zanda.

On Feb. 7, what was day six of the nine-day race—which can be completed on foot, skis or mountain bike—guides working the Yukon Arctic Ultra race located the Italian athlete’s sled, but not Zanda. 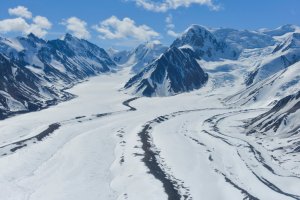 He had, up until that point, been averaging about 32 miles a day, and when he was ultimately located, he said he’d gone off in search of help after his feet began to freeze.

But the effects of hypothermia, which can trigger odd or confused behavior, may have been setting in: He tells the CBC he spent 18 hours trudging through the snow shoeless before being found.

He was airlifted to Whitehorse General Hospital, where an MRI showed circulation had essentially ceased in his feet. Yukon News reports only one 300-mile racer finished the race, which was called off early on Feb. 8 due to weather.

Robert Pollhammer, who helms the race, says “we’ve never had these cold temperatures from the start for an entire race.” But he pins the blame for Zanda’s situation on Zanda, telling the CBC “he had the right gear … he simply ignored all the warning signs of hypothermia.” (Runner’s World notes that those who register have to provide proof of their wilderness survival skills.) Further, Pollhammer thinks it was foolish of Zanda to leave his sled behind, as it contained a tracking device.

As for Zanda, he doesn’t seem to think it was foolish of him to participate: He tells the CBC he is without regrets, and that he won’t stop racing, even if he’s forced to do so with prosthetics.

It’ll be some months before doctors can gauge the degree to which Zanda’s circulation has recovered, and whether he’ll need to have his hands or feet amputated.

(Read about another brutal race.)

RIVERSIDE, Mo. -- Missourians who are still trying to get a COVID-19 vaccine can do so today, but need to act quickly.

The Platte County Health Department has hundreds of doses available at it's vaccination site in Riverside. They are accepting walk-ins until noon today.

The 71-year-old longtime Republican would face off against Democratic Gov. Gavin Newsom in a likely recall election later this year.

CHICAGO (NewsNation Now) — A new study finds there is no link between epidurals in childbirth and an increased risk for autism.

The research, published this month in the Journal of the American Medical Association pediatrics, helps resolve questions raised by an earlier study, suggesting there was an increased risk.