UPDATE: The ACLU of Missouri filed a lawsuit against the Independence School District  on Friday after the district banned a senior from participating in graduation because of a Craiglist ad prank. Friday night, a judge ruled in favor of the district. The teen won’t be allowed to walk at graduation on Saturday. Get the full story here.

INDEPENDENCE, Mo. — A senior at Truman High School will not be allowed to walk in his graduation because of a prank he pulled.

Kylan Scheele, 18, admits to posting an ad on Craigslist on Friday that listed Truman High School for sale; he said it was meant to be a joke.

“Other people were going to release live mice or, you know, building a beach in the front lobby area, and I thought let’s do something more laid back, so I just decided to post the school for sale,” Scheele said. 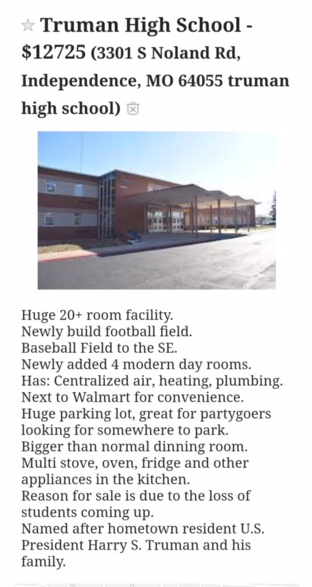 The ad listed several amenities including the schools newly built athletic fields, plenty of parking and a “bigger than normal dining room.” The Independence School District took issue with Kylan’s reason for the sale, which he wrote was “due to the loss of students coming up.”

“I decided to say the reason we’re selling this is because of ‘the loss of students,’ because the senior class is graduating,” Scheele explained.

On Wednesday, Sheele, who told FOX4 he has a 3.9 GPA, was notified that he was suspended for the remainder of the school and would not walk in Saturday’s graduation.

“A three-day suspension, sure, but denying me the ability to walk, that’s a lifetime moment,” Scheele said. “I think they’re overreacting.”

“He went and apologized and tried to make things right and in return they give him the harshest punishment possible,” Kylan’s mom, Denetra Clark said.

Detectives with the Independence Police Department investigated the incident and found no probable cause or reason to pursue criminal charges. The had Scheele delete the post and advised him to talk to school adminstrators.

“They [detectives] didn’t see a credible threat,” Clark said. “They all kind of had a little chuckle about it but they wanted him to understand you could see how other people could see it as a threat.”

A spokeswoman with the Independence School District released the following statement:

“We take student safety very seriously and appreciate the students and parents who brought this to our attention. Out of an abundance of caution, administrators and police investigated and determined there was not a credible threat. A student who makes a real or implied threat, whether it is deemed credible or not, will face discipline. Due to the heightened concern nationally with school violence, we have extra police officers for the remainder of the school year and will have additional officers at graduations for all of our high schools.”

“They tried to relate it back to all the recent school shootings and everything–they tried tying it back to that–but I don’t see how it was a threat at all,” Scheele said.

While Sheele and his mom are hoping the district will reverse its decision, the district’s spokeswoman said it “won’t be reconsidered.”

“He’s already put the effort in,” said Clark. “He’s going to get his diploma no matter what but maybe the party will start sooner.”

Looking back, Scheele said he wishes he had worded the post differently and that he regrets the outcome of his actions, but he insisted his intentions were harmless.

Kansas county on ‘high’ COVID alert ahead of Memorial …

KC mom regains custody of children with help from …

Song of summer from your high school graduation year

Kansas county on ‘high’ COVID alert ahead of Memorial …