LEAWOOD, Kan. -- A school community hopes and prays for a miracle, knowing a beloved coach is fighting an uphill battle to live. Blue Valley High School football coach Eric Driskell collapsed on Sunday and was placed on life support. 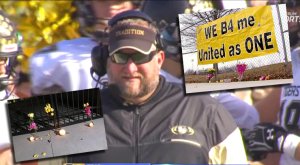 Emergency workers rushed the popular coach to a hospital after doctors say he suffered a ruptured brain aneurysm while dining with friends.

The Church of the Resurrection in Leawood held a special prayer service on Monday. His family attends church there, and they're bound to be hurting, as the 43-year old coach remains on life support -- and a community of his loved ones is keeping him close to their hearts.

“It's hard thinking about Eric and our time together, and what his family must be going through. I just can't imagine," said Dan Harris.

Harris knew Driskell would become a coach. He was part of the athletic department at Baker University, where Driskell attended school and started on the offensive line.

Those who know Driskell best say what sets him apart is that he put football second, and people first. Harris says no one cheered more loudly when Driskell returned to coach at Blue valley, where he led his alma mater to state 5-A championships in 2010 and 2013.

“It really reinforced to me what I thought Eric was when he left Baker University. He was a great, humble guy who was going to go out and change lives,” Harris said.

Driskell remains in intensive care, and has been on life support since Sunday. On Monday morning -- members of the school's touchdown club gathered at the high school and held a prayer vigil for Driskell on the sideline he loves.

At this hour, Blue Valley football coach Eric Driskell is still on life support some 27 hours after suffering a brain aneurysm. #fox4kc

“Think of all the lives Eric has touched. Those lives are going to go on with his memory, and want to accomplish something great,” Harris said.

Pastor Karen Lampe knows the Driskell family well; she's part of the congregational care team at Church of the Resurrection.

“What we hope happens tonight is just a sense of peace, even in the midst of tragedy, that somehow, there can be a sense of calm and peace reached for each individual in their own way," she said.

A member of the church's pastoral team has been with the Driskell family all day. The church's hope is to provide them, and Blue Valley's players, coaching staff and fans, a shoulder to lean on during a challenging time.

A vigil is also planned for Monday night:

FRANKLIN COUNTY, Kan. -- One person died in a crash along I-35 in Franklin County, Kansas. The crash happened before 7 a.m. Tuesday near the Le Loup exit, approximately a 45 minute drive southwest of the metro. Kansas State Patrol shut down one lane of traffic while the conducted their investigation. The highway has since reopened. Officials have not yet said what led up to the crash or identified the…

PENSACOLA, Fla. — A Florida man is in police custody after running from police, climbing a radio tower and staying up there for more than five hours.

Pensacola police told WKRG that the man is a registered sex offender.

MOUNT PLEASANT, S.C. — When Austin Conway posted about the struggles of having a dog, he never expected the impact the post would have.

The professional baseball player shared the realities of life with his German Shepherd mix, Stella.