SHAWNEE, Kan. — Voters will have the final say on a proposed $38 million community center in Shawnee.

On Monday, the Shawnee City Council voted to put the issue on a mail-in ballot in May, leaving it to taxpayers to decide whether they agree to a property tax increase to pay for the center.

The 67,000-square-foot facility, which would be located at West 61st and Woodland, would feature an indoor aquatic center — including a lap pool and lazy river — a fitness center, gyms, a playground and multi-purpose rooms, among other amenities. 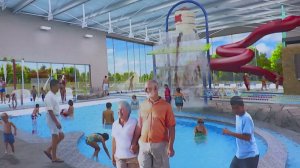 Residents both for and against the project packed the council meeting Monday night, waiting to hear what council members would do.

“They gave us the chance to vote on this,” said Eric Danielson, a Shawnee resident, who attended the meeting and agreed with the council’s decision. “It’s a great opportunity for us to say what we really want to have here as a community, and the chance to have a recreation center is good for Shawnee.”

“It’s a rec center that’s going to fail, and it’s going to be harder to re-purpose than a box store,” said Tracy Thomas, who also was at the meeting but disagreed with the decision. “We don’t need it. There are plenty of health clubs you can attend right now.”

So how much of an increase should property owners expect? Let’s say your home is valued around $263,000 – the average home value in Shawnee. You would see about a $7 increase on your property taxes every month, or roughly $90 for the year.

The facility will not be free. Residents will have to pay membership fees to use the center. You can read more about it here.

As a parent, Liz Pray accepts her 13-year-old son's return to school.

As a school nurse, she doubts the Moses Lake School District in central Washington state is prepared for the challenges that come with schooling amid the coronavirus pandemic.