KANSAS CITY, Mo. – A 6-year-old Royals fan is forgiving Salvador Perez for fouling off a pitch that ended up hitting him in the face. Not only does Braden Oliphant forgive the catcher, he is proudly rocking his “Salvy Souvenir,” a black and blue cheek.

“I’ll forgive him that he hit me in the cheek,” said Braden. “It was an accident.”

The little boy lives in Houston but has family roots in Kansas City, so he’s standing behind the Royals catcher.

“When I went to the doctor there was a little crack in my cheek.” Braden told FOX 4.

It happened in the second inning of the Royals-Astros game last Monday. Seconds after Perez hit the foul ball fans could see a look of concern on his face.

Paul Oliphant, Braden’s father, said he immediately took his son to the paramedic in the stadium.

“We ran to the top of the stairs and I think on the radio they were commenting how fast that person was moving to get out of the stadium,” he said.

After being checked out by paramedics, Braden learned he had a fracture in his cheek. Soon after, he went back in to watch the rest of the game.

Braden’s uncle, Tim Oliphant, lives here in Kansas City. He said he was watching the game when his nephew was hit by the ball, but at the time had no idea he was the one hit.

“We want Salvador Perez to know he’s alright and we would like for Salvador to take this time to reach out to a young fan and maybe make a friend for life,” he said.

After FOX 4 aired Braden’s story, Salvy reached out to Braden on Instagram. After seeing his picture, Salvy responded ‘Sorry Amigo’. He included two peace sign emojis with his message.

Braden is offering a piece of advice to Salvy.

“I want to say try not hitting a boy because it would be a nice feeling,” he said.

The Astros sent Braden a care package with a signed jersey, swag bag, hat and the game ball. Braden is almost healed up. ​ 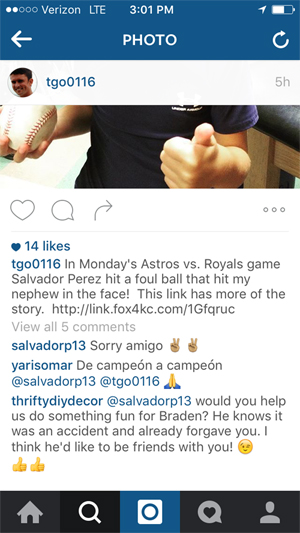 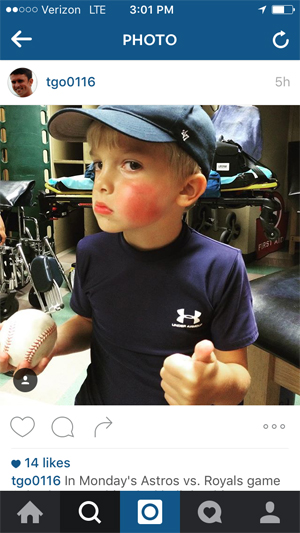