TOPEKA, Kan. — An attorney says organizers of a small-town Kansas parade won’t try to stop Republican gubernatorial candidate Kris Kobach from riding in a Jeep with a replica machine gun on the back.

But attorney Daniel Schowengerdt said Friday night that the organizing committee for Iola’s Farm City Days expects Kobach to put a sign on the jeep during Saturday’s parade saying the committee doesn’t condone the display of “large scale military weapons” during the event. He said the sign will say the committee does support gun rights.

The organizers previously told Kobach he had to remove the gun because it clashed with the event’s message of bringing farms and cities together.

Schowengerdt said the committee was in talks Friday with Kobach’s campaign to find a compromise.

But Kobach said that he believes the organizers can’t prevent him from using the Jeep with the gun in the parade scheduled for Saturday without violating his free speech rights.

Kobach, the Kansas secretary of state, has been riding in the Jeep with the replica gun at least since June. Its appearance then in a suburban Kansas City parade prompted criticism, an apology from the sponsoring city and what Kobach derided as a “snowflake meltdown.”

He quickly made it a symbol of his defiance of liberal criticism and his support for gun-ownership rights protected by the Second Amendment to the U.S. Constitution.

Iola, with about 5,700 residents, is about 100 miles southwest of Kansas City. 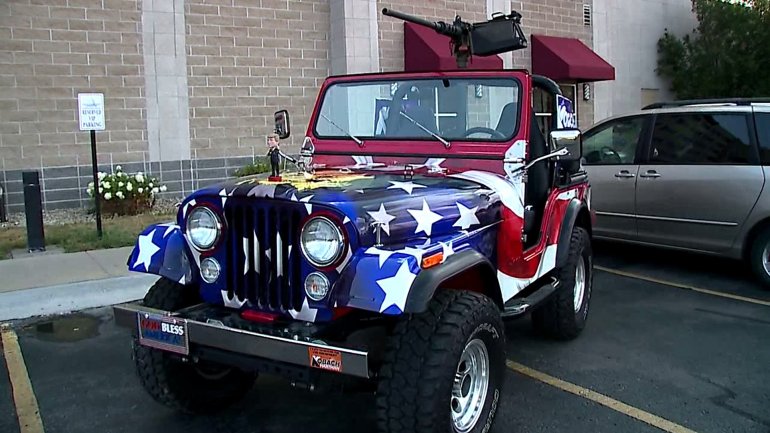 Schowengerdt said the organizers had no problem with the Jeep, which is decorated with U.S. flag designs and has a bobble-head of President Donald Trump on its hood — only with the replica machine gun. He said that under past U.S. Supreme Court decisions, private parade organizers have a right to choose the content of their events.

“They are pro-Second Amendment,” he said of the organizers. “This is not a leftist organization. In fact, the vast majority of the people on the committee are gun-owning Republicans.”

The entry form for the parade does not mention firearms or mounted guns but says parade organizers “reserve the right to refuse entry to any person, group or entity. It also bans semi-trucks and tells participants that they cannot throw candy or other items from a float or vehicle.

“They felt and feel that a mounted, replica, .50-caliber machine gun does not fit with their message,” Schowengerdt said. “The Jeep is free to be there.”

Virginia Crossland Macha, a local GOP activist who backs Kobach, said she was upset enough by the organizing committee’s decision that she resigned as its president; she was not present for its vote. She said Farm City Days is non-partisan and staffed by volunteers and has now been drawn into “a mess” that could hurt the event.

“I just find it kind of crazy,” she said.

Kobach said said Iola is the first community to express any reluctance about the replica machine gun.

“In contrast, we’ve had mayors from other cities asking us to bring the gun,” Kobach said. “The Second Amendment applies as well in the city as it does in the country, and there is no conflict whatsoever between the joining of city and country and the Second Amendment.”

FOX4 Forecast: Stormy start with a drier finish…for some