TRENTON, Mo. — A 24-year-old officer and mother is recovering in the hospital after being shot in the stomach Friday afternoon.

Jasmine Diab works for the Trenton Police Department. It’s about an hour and a half northeast of Kansas City. That’s where FOX4 spoke with some of Jasmine Diab’s friends Saturday.

Diab’s friends say she is recovering but has a long way to go. Doctors performed an emergency surgery Friday night and she’s set to have another one Saturday.

Diab is new to the Trenton Police Department. She was sworn in as an officer in June 2017. However, the young officer seems to have a huge impact on everyone she meets. Both the small community of Trenton and her hometown of Moberly, Missouri rallying behind her. 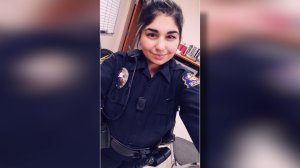 “As tragic as this is, that has happened, God can make something good come from it and I feel like with what has happened to Jasmine, it has brought everyone close together,” said friend Mary Delile. “Not just our community but surrounding communities, strangers, people that have heard about it but don’t really know her, like wanting to help, it’s brought a lot of people together.”

Diab’s friends have created a Facebook support page called “Helping Jasmine Diab.” They’ve also created and are selling t-shirts. Part of the proceeds will go to Diab, who has a young daughter. Click here to go to the page.

“My daughter just absolutely gravitated towards her and has been best friends ever since,” Kara Wilson said. “Every police car we see, she wants to know if it’s police officer Jasmine.”

A close friend of Diab, Kendra Lickteig said she spoke with her Saturday morning.

“She cannot talk but she can nod and smile. We have people taking care of her animal, mowing her yard, people are preparing frozen meals for when she comes home,” Lickteig said.

As of Saturday, Diab is reported to still be in critical but stable condition.

The suspect who shot Diab, Jamey Griffin, has been charged with first degree assault, armed criminal action and unlawful use of a weapon.

SPRINGFIELD, Mo. — The Birthplace of Route 66 Festival in Springfield, Missouri has been canceled due to COVID-19 concerns, according to the City of Springfield. The steering committee of the Birthplace of Route 66 Festival unanimously voted to cancel the event, according to a news release. “Last year’s attendance was 65,000 over two days and we were projecting to top 75,000 this year, based on the tempo of registrations,” Cora…

KANSAS CITY, Mo. -- Kansas City police are now investigating their second homicide in less than an hour Monday afternoon. Just before 2 p.m. officers were called to the area of 12th Street and Brooklyn for a reported shooting, a KCPD spokesperson said. When officers arrived they found one person suffering from gunshot wounds who was pronounced dead at the scene. The victim's identity has not been released at this…

MINNEAPOLIS -- An independent autopsy into the death of George Floyd found that the unarmed black man died from "asphyxiation from sustained pressure," according to attorney Ben Crump. Floyd was essentially "dead on the scene" in Minneapolis on May 25, Crump said. "The ambulance was his hearse," the family's attorney told reporters Monday. The independent autopsy's findings come after the Hennepin County Medical Examiner found "no physical findings" to "support a diagnosis of…