KANSAS CITY, Mo. – They say laughter is the best medicine, but for a young woman who said she was drugged and left to die, comedy is how she copes.

Mandy Horvath had just turned 21. She was on a camping trip with friends in Nebraska back in 2014. They’d gone to shoot pool at a bar.

“I had two beers and two shots, and after I picked up and drank my second beer, I stepped outside,” she said. “I remember petting horses, and I woke up in an ambulance.”

She said paramedics found her lying on a set of train tracks. She’d been hit by a coal train, and she had no legs.

“I was found almost a half mile from the bar up on the tracks,” Horvath said.

She believes someone spiked her drink, though she’ll never know who, why or what happened during the time she was blacked out.

“I’d just seen my family the week before,” she said. “I worked full time. I was really active. I loved my life.”

Her life now is about adaptation and advancing. She doesn’t deny anger or deep pain.

“Hey, I had my time curling up in a ball,” Horvath said. “But I mean, there comes a point where I can stop feeling sorry for myself and pick up and help other people, too.” 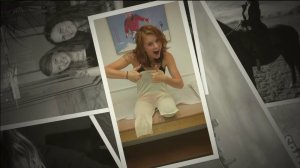 Horvath handles the heartache with humor.

“It’s sometimes easier for people to relate to you if you can just float a joke about it,” she said.

While she’s able to laugh about it now, she said there is a dark side. The hardest part, and the thing she most wants people to know, is that no one is exempt.

“That’s the truth,” Horvath said. “That’s really scary. People don’t think it’ll happen to them. Those things are out there and it can get really ugly.”

The 24-year-old is going through prosthetic therapy but says it’s like learning to walk on stilts.

“I look very similar to what I call a baby giraffe on my legs sometimes,” she said with a laugh.

Her comedy is also catching quite a following on the dating app Tinder. She has a long list of jokes in her profile, each taking aim at herself. She said the back-and-forth with boys is fun but she hasn’t found anything too serious yet.

Make no mistake; along with that sense of humor and strength, the survivor’s got some sass, too.

“Let’s redefine what a disability is; because it’s not a disability,” Horvath said. “I’m perfectly capable and able to do anything, and so is anybody else. And that’s what I really want people to know. There’s always life after the unimaginable.”

Horvath goes to school in Colorado and said she’s considering switching majors from biology to communications so she can better share her story and continue to inspire strangers.