KANSAS CITY, Mo. — School in June – that is a very real possibility for many students in Missouri now that schools have called off class on Wednesday yet again due to snow. Kids love getting the day off school due to snow, but what they don’t realize is they’ll have to make up that lost time somehow. 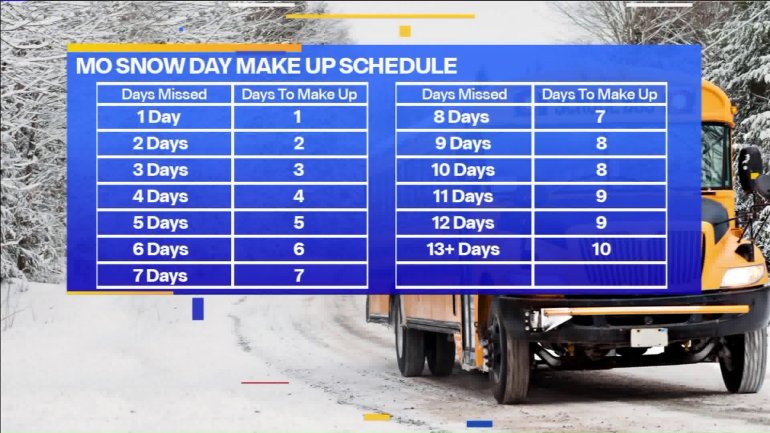 This year, there have been nine snow days in the metro – so schools will add eight days to the school year. Some rural school districts have already had around 15 snow days!

Most schools were set to get out around May 22nd – but now many are looking at the first week of June. That means when it’s warm outside and the pools are open, kids in Missouri will still be in class.

School officials don’t like this because it conflicts with vacation plans, which means many kids, and teachers, end up missing these last days of school.

This rule, though, will soon change. Beginning next school year, Missouri students will have to be in school a certain number of hours instead of days. So starting next year, schools can add on time to the school day to make up snow days rather than force kids to come back to school after Memorial Day.

Kansas already does this. Many already build in snow days to the school calendar, but with so many snow days already this year, some Kansas districts might have to make the school days longer. Some might decide to shorten spring break.

Each district is free to do its own thing – and in fact, the Center School District surveys parents to see what they want to do to make up this lost time.

KANSAS CITY, Mo. -- Last week, meteorologist Garry Frank fired up the grill, but cooked something without meat because it's hard to find these days.

For the carnivore crowd, this week you're in luck because Garry has found some meat. Watch him put together street tacos with carne asada in the video.

RAYTOWN, Mo. -- Raytown police shot and wounded a suspect Sunday evening in the 6000 block of Kentucky.

The Missouri Highway Patrol is investigating the officer-involved shooting and say no officers were hurt during the incident. Raytown officers were originally called to the scene just before 5:30 p.m., for a disturbance with someone who possibly had a weapon, no further details about the initial incident have been released.