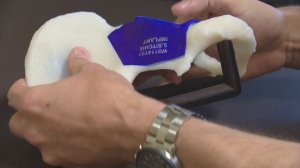 HIGHLANDS RANCH, Col. — It is no longer the stuff of science fiction, printing body parts is reality. In January, an orthopedic surgeon in Highlands Ranch replaced part of a man’s pelvis with a customized 3D printed implant. He used state-of-the-art technology to tackle bone cancer.

For Scott Ritchie from Loveland, this was the chance to survive a rare form of cancer and still be able to walk on his own.

Leaning a little bit on crutches, Scott was able to climb the stairs to his doctor’s office. That was impressive considering just two weeks ago, the 52 year old had major surgery.

Scott is an outdoorsman. About a year ago, he first noticed pain in his right hip after fly fishing.

“The pain was getting worse as time went on,” Scott told CBS4 Health Specialist Kathy Walsh.

An MRI showed chondrosarcoma, a rare form of bone cancer in Scott’s right pelvis. Scott was told, with this tumor, chemotherapy and radiation aren’t effective.

“It had to be cut out and removed is what I was told,” he said.

Dr. Ronald Hugate is an orthopedic oncologist at Panorama Orthopedics and Spine Center. He was ready to tackle the complex problem.

“You basically have to plan a surgery that’s going to be successful in removing all the cancer cells,” Hugate said.

This planning would be done with cutting edge technology.

“You can see this dark area right here is his tumor,” explained Hugate pointing to Scott’s MRI.

Using the MRI and CT scans, Hugate made a 3D virtual model of the pelvis. Virtually, he was able to map out the surgery and plan precisely what needed to be removed to get rid of the tumor safely.

Hugate then designed an implant that was an exact replica of the missing bone.

“And you can see it fits in there just like a jigsaw puzzle,” he said.

The body part, made of titanium, was printed on a 3D printer.

Along with a hip replacement, the entire surgery took under three hours.

“All the major muscles that control walking we were able to preserve,” Hugate said.

Scott is expected to start walking without crutches in six weeks. He’s been warned, he may have a limp.

“If I do have a limp, it’s better than nothing,” he said.

It’s a small price to pay for walking away cancer free.

This is just the second case Hugate has done using this technology. He says surgical precision, customized reconstruction and less time in the operating room are great benefits.