Friends and family arrived Saturday morning at City Bible Church in Vancouver, Washington, in floral print dresses and shocking pink polo shirts, brightly colored boas and sparkly bolero ties to celebrate the life of Julianna Yuri Snow. Her ‘tea party’ funeral was another conscious choice she made to have a ‘fabulous funeral.’

Julianna, who had an incurable neuromuscular disorder, chose heaven over the hospital, and last week, she died, going to heaven on her own terms.

Her choice to forego medical interventions at the end of her life was made with the blessings of her physicians and nurses at Doernbecher Children’s Hospital in Portland.

“We pulled her from death’s door so many times last year, but she’s sicker now than she was then, and I don’t think we could pull her through another big crisis,” one of her intensive care unit nurses, Diana Scolaro, said last fall.

“She doesn’t have a long time to live,” her pulmonologist, Dr. Danny Hsia, added at the time. “For her, there is no light at the end of the tunnel.”

During her life, Julianna’s story became known to millions and sparked a conversation about the role children should play in making their own end-of-life medical decisions.

And in death, she had a funeral that fit her magnificent, sparkly, princess self.

A funeral with a cupcake bar

She couldn’t use her arms or legs or breathe or eat on her own, but Julianna didn’t know that her life should be anything but fabulous.

Every morning, she donned a princess dress and tiara. She dreamed up elaborate make-believe games with her dolls and animals. She insisted on polished nails and asked to have glitter spilled on her fingers.

“There’s no such thing as too much [glitter],” she told me during a visit with her last fall.

And she loved tea parties.

So her parents — Dr. Michelle Moon, a neurologist, and Steve Snow, a former Air Force fighter pilot — hosted a tea party instead of a traditional funeral.

“I’m hoping it’s an over the top, joyful explosion that brings people together to have fun and enjoy. That’s what she loved to do, and what she was so good at facilitating,” she added in an email to CNN. “We want to make J proud.”

When family and friends arrived at the church, pink balloons greeted them, along with a pink poster made by her grandfather Tom Snow.

“Text from Julianna: Arrived in heaven! I am healed! Thank you for your love! Hope to see you in God’s time,” the poster read.

To the right was a table full of Julianna’s toys, the tiny dolls and Hello Kitty figurines and ponies with long pink tails and bunnies and bears and mice that populated the stories she made up.

Children were welcome to take her toys home and follow “J’s Rules of Hospitality for Toys (and People)” that were taped to the table on a sign with a purple border.

Make sure they feel welcome in your room.

Give them a name.

It’s okay if the name is the same as yours.

Introduce them to your other toys.

When you are watching something on TV, turn them around so they can see, too.

Next to the toys, a long table held tea sandwiches — cucumber and mint, tuna salad, peanut butter and jelly — but not egg salad, because Julianna thought egg salad was “stinky.”

In the back of the church, friends and family frosted and decorated cupcakes at one station and painted their nails at another.

Wood carvings of bunnies and teapots, made by her grandfather, decorated the walls. He also made bright pink easels to hold family photos. Signs for the food and nail and cupcake bars were written out in fancy handwriting and glitter by Moon’s cousins.

A family video and Julianna’s favorite song — Carrie Underwood’s version of “Hark! The Herald Angels Sing” — played in the background.

“Julianna cared about the details, so there [are] a lot of details here,” Moon wrote. 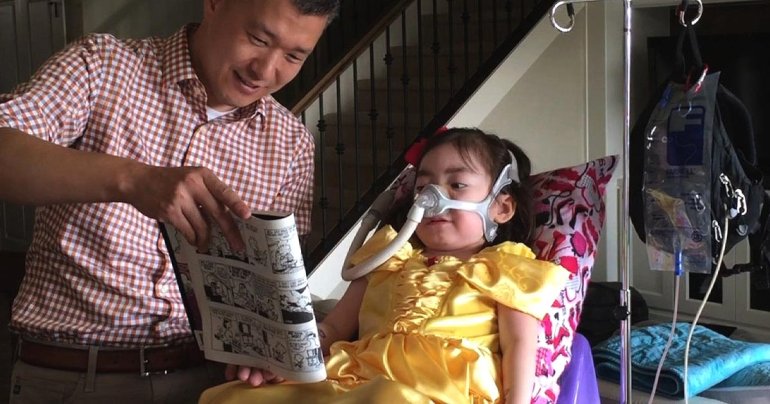 Looking back, the Sunday before Julianna’s death was “a gift,” Moon says.

She and Julianna dyed a Barbie’s hair rainbow colors and made flowers out of pencils and fabric.

It was sunny and warm, and they took Julianna outside. Moon said she felt that she could relax and enjoy the moments with Julianna and her brother, Alex, 7.

Later in the afternoon, one of Julianna’s favorite hospice nurses, Juliah Larson, came by for a visit.

Then, late Sunday night, Julianna started to have trouble breathing. Respecting her wishes, her parents made her as comfortable as possible but did not take her to the hospital.

With less than 24 hours left to live, Julianna got in one last joke. Thirsty, she asked for “ice, ice baby,” quoting the song by Vanilla Ice.

“She has a lot of ’80s references because that was my decade,” Moon said.

And she slipped in one last fashion observation to her mother, who never dressed quite as fabulously as Julianna would have liked.

“I was wearing a plain gray sweater that she hadn’t seen before,” her mother said. “She said, ‘What’s that?’ which is Julianna code for ‘You can do better than that.'”

In the early morning hours of June 14, Julianna passed away.

“She died at home, in her princess room and in my arms,” Moon said. “She died exactly where she wanted to die.”

“She went after 18 beautiful months [in hospice]. She didn’t go after a year of horrible hospitalizations,” she added.

“I take comfort knowing that it happened in the way she wanted it to happen.”

Now, they’re focused on raising money to fight the disease Julianna had, Charcot-Marie-Tooth disease, through a book she wrote and a fundraising page.

A legacy of love

Julianna’s parents say one of the things they learned from the last year and a half of her life is that priorities matter.

Before, their priority had been treating her illness.

But “it became abundantly clear that there was nothing we could do to save her from her disease,” Snow said in a speech at the funeral.

After that, Julianna still received care, such as treatments to make breathing easier, but the family’s priorities shifted.

“We didn’t stop doing medical stuff — we did a lot of medical stuff — but it wasn’t our focus. But it was in the background,” Moon said. “Instead, we made things she loved the priority. That really helped her thrive and helped us enjoy our time with her.”

Julianna thrived during this time, her parents say, with her nail polish and crafts and stories and jokes.

“We got to enjoy and love on Julianna, and her spirit and imagination thrived because of that love. We got to share her love with the world,” her father said.

Moon and Snow said they hope Julianna’s legacy is that unconditional love and joy.

Or, to quote Julianna, “Love is a superpower. It makes the bad guys good.”