KANSAS CITY, Kan. — Months of hard work, time, money: a teenager`s prized-possession stolen from behind a building in Basehor. Tina Cochran said her daughter has been racing since she was five and now she has nothing to drive.

Cochran said her 15-year-old daughter Kya spent two summers working the concession stand at Lakeside Speedway to save up money to build her own race car. She’s starting off this summer with some bad news. Her family told FOX 4 earlier this week, someone stole that race car.

Cochran described her daughter as, “a child who has worked harder than these guys who stole it probably have.” She said, with tears in her eyes, that racing has always been in her daughter’s blood. “Every dollar she earns goes toward racing.”

She stored her Kya’s modified dirt car behind the building where she works in Basehor. She said when she got there Tuesday, it was gone.

“The tarp was on the ground, you could see the marks, the drug it away,” Cochran said.

The news made for a very difficult phone call to her teen.

“To break that girl`s heart. To have to call her and tell her somebody stole her car, to hear your child cry because everything she`s worked for was taken away. It’s aggravating. It’s hurtful. It’s painful,” she said.

Cochran said Kya’s father raced, and everyone in the family shares the number 51. Her daughter started with go karts on dirt tracks when she was younger and graduated to bigger plans. “Her goal was to get a big car and to race with the adults. She`s been, every dollar she has, buying parts for this car and grown adult men took that from a child.”

Jodi Cochran works at Lakeside Speedway where Kya worked and watched races. She says she can`t imagine how hard this is for Kya’s parents.

“Your kid`s bicycle gets stolen and you want to cry for them and to have a car taken, is just unbelievable. Unbelievable that somebody would take a race car,” Jodi said.

Tina Cochran said her daughter’s car is worth about $5,000 and has distinguishing marks. Clues she hopes will help police find and return to Kya what`s rightfully hers. 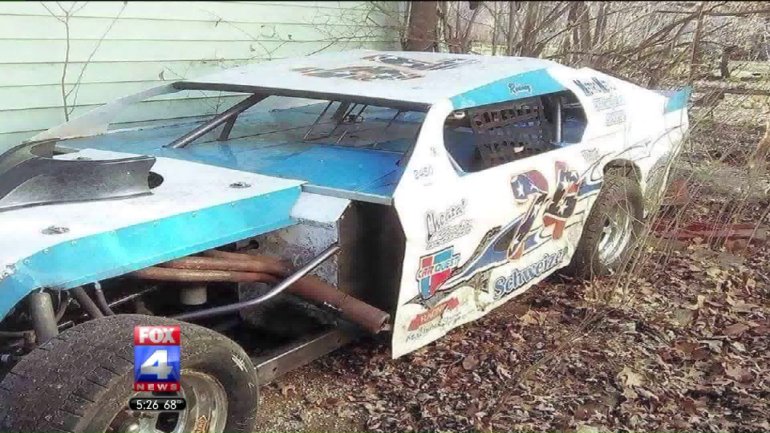 Jodi Cochran said, “She`s going to get right back in it. It`s in your blood. Once you`re a racer, you`re always a racer.”

Vicki Davis also works at Lakeside Speedway. She said the racing community is tight-knit group and when something happens to one racer, it affects them all. Davis, a former racer herself, is rallying around Kya. Davis said anyone who races knows the time, effort, and money that goes into this sport, and she was sickened when she heard someone stole Cochran`s car.

She has a message for the teen: “Hang in there. We`re going to find that car. The racing community has arms everywhere. Everybody`s going to be watching for it.”

Davis also had a message for the people responsible for taking Kya`s car. She said, “Leave it here at Lakeside Speedway, no questions asked, we`ll make sure it gets back to her.”

Meanwhile, if you have any information about who took the car, you`re asked to call the Leavenworth County Sheriff`s Office.

KANSAS CITY, Kan. -- The Kansas City, Kansas Police Department is asking for the public's help in locating a 39-year-old man who was last seen Sunday evening.

Police say Dwan Taylor's family last spoke to him at 9 p.m. Sunday. There is reason to believe his safety is in jeopardy and his family is very concerned, according to police.

When you think about how far mankind has come mentally, technologically and physically, we see great strides, especially when compared with our primate relatives.

But there is another feature that sets us apart from our chimpanzee and ape ancestors: water efficiency.

LOUISVILLE, Ky. — A judge in Kentucky has signed an order permanently closing a criminal case against Breonna Taylor’s boyfriend, who shot a police officer during the deadly raid that killed Taylor.

Prosecutors dismissed an attempted murder of a police officer charge against Kenneth L. Walker in May, about two months after Taylor’s death. But prosecutors left open the opportunity to revisit the charge against Walker if new evidence surfaced.

Stimulus check calculator: Do you qualify for $1,400?