KNOXVILLE, Tenn. — A middle school boy in Tennessee is hopefully feeling the support of hundreds of thousands of people who saw his tears on social media.

His mother recorded video of him in the car, telling her about the bullying he’d just gone through.

While fighting back tears, young Keaton Jones asks the question, “Why?” 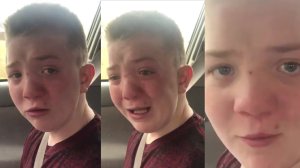 “Just out of curiosity, why do they bully? What’s the point of it?”

“Why do you find joy in taking innocent people and finding a way to be mean to them? It’s not okay.”

The voice of Keaton’s mother quivers as she listens to him talk about his day.

“They make fun of my nose. They call me ugly. They say I have no friends,” Keaton says, tearing up. The bullies “put milk on me and put ham down my clothes, throw bread on me.”

“People that are different don’t need to be criticized,” he said, adding that he isn’t the only one the bullies pick on.

Talking it out– and the love of his mother- seemed to help Keaton Jones because he ends with a hopeful message for others who are feeling the pain of bullying.

“But if you are made fun of, just don’t let it bother you. Just stay strong, I guess,” Keaton says, gulping. “It’s hard. But … it’ll probably get better one day.”

One of the first to respond to the video was the Tennessee Titans’ Delanie Walker, who reached out to Jones and his mother on Twitter Saturday with words of encouragement and an offer of tickets to a Titans game. Walker said that he hoped to raise awareness to bullying in schools.

@DonteStallworth @Lakyn_Jones hopefully my video and the tweets that Keaton have been getting brings awareness to bullying and how serious it is in our school system pic.twitter.com/1Dujv3RxA5

However, Walker was not the last to reach out, as Jones’ story has touched many.

Avengers’ star Chris Evans reached out to Jones via Twitter, inviting him and his mother to the premiere of the new Avengers’ film next summer:

Stay strong, Keaton. Don’t let them make you turn cold. I promise it gets better. While those punks at your school are deciding what kind of people they want to be in this world, how would you and your mom like to come to the Avengers premiere in LA next year? https://t.co/s1QwCQ3toi

Cleveland Cavaliers’ players J.R. Smith and LeBron James were among some of the others to respond, with Smith saying that Jones should come out to a game when the Cavaliers play in Memphis.

That’s a damn shame. Keaton if your around when we play in Memphis i would love to invite you to one of our games. Head up Champ! https://t.co/Moh9ObdgX8

The hashtag “#StandWithKeaton” was trending for a period this weekend and has evoked thousands of responses.

Singer Katy Perry and NBA legend Bill Russell also responded with tweets, urging people to be kind to one another and spread Keaton’s story:

ALBUQUERQUE, N.M. (KRQE) - A Texas woman died of COVID-19 while onboard a Spirit Airlines flight that was diverted to Albuquerque earlier this year.

According to The Washington Post, on the evening of July 24, the flight left Las Vegas and was on its way to the Dallas-Fort Worth International Airport when it was diverted to Albuquerque.

In the tweet, she says,"If you're having a bad day, just think of all the social services we're going to fund after we defund the Pentagon".