KANSAS CITY, Mo. — You wouldn’t know it by looking at her now, but over the weekend a KC couple’s Rottweiler almost died after she ate a bottle of Gorilla Glue.

“It was such a blur of a night for us. We cried all weekend,” Sanders said.

“The diagnosis wasn’t good. It all just happened so fast,” Blake added.

He said one minute he was repairing exercise equipment with Gorilla Glue, but when he turned his back: “Lucy just jumped onto the kitchen table, grabbed the container of Gorilla Glue and chomped it into pieces,” he told FOX4’s Robert Townsend. 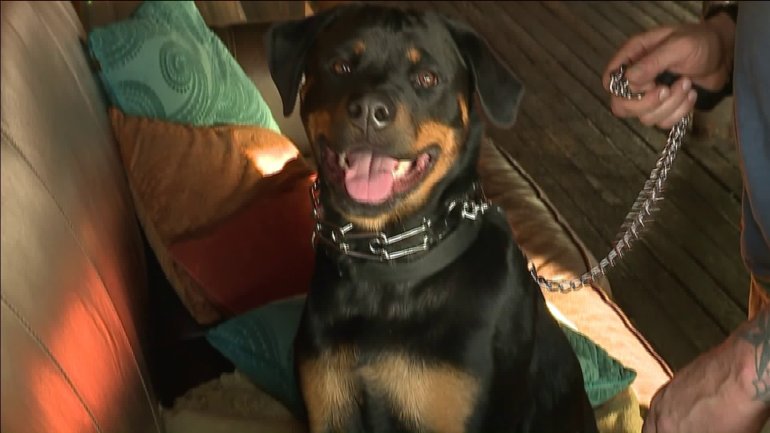 “The Gorilla Glue apparently has a sweet smell that the dogs like,” he said. “She went at it and had it so fast.”

Blake and Sanders rushed a weak, dehydrated and shaking Lucy to the Mission Emergency Veterinary Clinic.

“By the time we got there, her stomach had already swollen,” Sanders said.

Veterinarian Philip Allen said, as a result of ingesting the glue, Lucy suffered a severe growth the size of a cantaloupe in her stomach. Allen said had her owners not brought in the puppy right away, Lucy would have been dead within a day.

In fact, Blake and Sanders said everyone was convinced Lucy wouldn’t survive.

“Walking away from her and thinking she was not going to live was just awful,” Sanders said.

The couple signed Lucy over to the veterinary clinic, posted their final farewells to their beloved pet on Facebook and threw away Lucy’s toys, bowls and a lot more.

However, the heart-sick couple had no idea that Allen, who has two dogs himself, refused to let Lucy go. Allen performed emergency surgery on the ill pup and removed the large mass from her stomach.

By the next day, Lucy was out of intensive care and eating again.

“Oh my gosh is she a miracle because when we left her Saturday night, there was little to no hope,” Sanders said. “We are so thankful to Dr. Allen and the Mission Vet staff.”

“Yes, Dr. Allen performed a miracle and saved her for us,” Blake said. “I just want to let people know that you use Gorilla Glue for crafts and stuff. It’s a solid product, but dogs crave it. If you turn your back for any moment, the dog can take hold of it, and it’s too late. So be very careful.”

“Veterinarians, we’re softie,” Allen said. “We all just went into this because we love dogs and cats. Hopefully that puppy’s got a decade plus of life to live.”