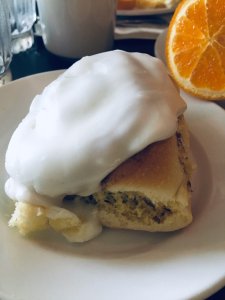 In just about every breakfast joint, cafe, coffee shop, and bistro, customers will find cinnamon rolls on the menu. The pastry isn’t this popular in other cities, but for some reason the sweet has captivated the City of Fountains. You could easily make a cinnamon roll tour by just going to KC eateries. Writer Khushbu Shah for the Condé Nast Traveler did just that by heading to around eleven places in the 48 hours he had to visit the city.

So to satisfy your cinnamon cravings, FOX4 is getting to the heart of cinnamon, its history, where you can find some of the best rolls locally, and a recipe in case you want to explore your skills as a baker.

A cinnamon roll is a sweet roll served throughout the United States and Northern Europe. The food staple likely originated from Sweden, with the name “kanelbulle.” Cinnamon came from Sri Lanka more than 2,000 years ago. The Romans were responsible for spreading the spice and using it in incense and wine.

Around the mid 1700s, Northern European bakers used super rich, butter-infused yeast dough. The French shaped them into buns; the Dutch fried them in oil. Around this time, the British invented the Chelsea bun, a type of currant bun. The Germans invented the schnecken, a bun rolled with sugar and currants. The Swedish added cinnamon.

October 4 is known as International Cinnamon Roll Day, or kanelbullens dag. Cinnamon buns are often enjoyed during fika, a Swedish word for taking a break to sit down with others and share pastries, coffee, and life.

Cinnamon rolls also go by the names cinnamon bun, cinnamon swirl, cinnamon Danish, and cinnamon snail (Kanelsnegl). The main ingredients are flour, cinnamon, sugar, and butter. People usually eat it for breakfast or dessert with cream cheese. In Kansas it is common to serve at dinner with chili. Raisins or other ingredients are occasionally added to the bun.

Cinnamon rolls in Sweden are not as sweet and heavy as they are in the United States. In Sweden, the dough contains a hint of cardamom.

A German variety originating in Hamburg is the Franzbrötchen, a cinnamon pastry inspired by the non-cinnamon French croissant.

Philadelphia-style cinnamon rolls date back to the 18th century. It contains honey, sugar, cinnamon and raisins.

Scratch Bakery KC is a casual eatery for breakfast and lunch with fresh juices. It’s located near 9th & May. The bakers make a delectable flaky cinnamon roll. It comes with slathers of cream cheese frosting on top. The bakery offers several other treats including baked pop tarts and cookies.

Corner Cafe has three locations strewn across the greater Kansas City area. Each serves a giant and  out-of-this-world cinnamon roll. The cinnamon snails come with several spirals of dough, butter, and cinnamon… and require a knife to cut through.

Chubby’s is a 24-hour diner with a retro vibe serving up classic comfort foods. The cinnamon rolls are made from scratch, and you can order one for the low price of $0.75.

Neighborhood Cafe is loved so much by fans, that they were upset this wasn’t initially on the list and reached out to make sure it was added. The restaurant offers home-style cooking with made from scratch pastries. You receive a cinnamon roll when you sit at the table to order. The cafe in Lee’s Summit also does catering.

Captain’s Corner also wasn’t initially on the list, but it sent in a picture with cinnamon buns bigger than my hand. The frosting on top looks hypnotic. Captain’s Corner is north of Kansas City in Smithville.

Heirloom Bakery and Hearth has a wide menu with everything from muffins to scones. There are also house-made jams and tempting key lime pie bars. The real star is the light and fluffy cinnamon roll, which is lighter on the cinnamon and heavier on the frosting. There is also a pumpkin flavored cinnamon roll.

Hidden up in North Kansas City, Donut King offers up more than 40 donut types, plus hot dogs, and milkshakes. It also serves up a monster cinnamon roll topped with cream cheese and pecans.

You Say Tomato has one of the best brunch menus in Kansas City, with fresh vegetables and fruits on hand. The cinnamon roll there is not too sweet, a little tease of salt, and no frosting needed. The roll is the right balance of gooey and crispiness.

The Mixing Bowl Noshery makes cinnamon rolls with no yeast. The recipe was handed down from the owner’s grandmother.

Best Regards Bakery & Cafe in Overland Park lets customers put their own icing on the roll, but the rolls are good without icing. The cafe also uses a secret weapon: Saigon cinnamon.

These next two restaurants would be recommended by Parks and Recreation fan favorite Ron Swanson. Roxanne’s Cafe is worth a stop for a combo of cinnamon rolls and crispy bacon. Jerry’s Cafe offers cinnamon rolls as big as a plate; we’ll call it the mammoth Godzilla cinnamon snail.

If you don’t have a bread machine, you can make these by hand. Warm up the milk, water, and butter in the pan and then add it to a bowl with the yeast. Let it stand for 10 minutes. Then add the flour, eggs, and salt all at the same time. Turn the dough out and kneed with 1/4 cup of flour. Leave in a cold oven overnight and bake the next day for 18 minutes.