KANSAS CITY, Mo. -- Brother Guy Consolmagno SJ has spent most of his life studying the heavens. He looks up and wonders what's out there, both in the physical universe and beyond. 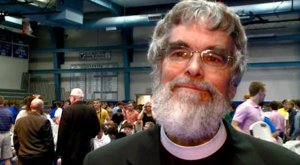 Consolmagno has managed to balance his studies of astronomy and theology, and has authored more than 200 scientific publications along with popular books such as "Turn Left at Orion" and "Would You Baptize an Extraterrestrial?"

He has hosted science programs for BBC Radio 4, appeared on The Colbert Report, and has penned a monthly science column for the British Catholic magazine, The Tablet, for more than ten years, according to his biography on the Vatican Observatory website.

On Tuesday, Consolmagno visited Rockhurst High School to speak to the students about his astronomy research, as well as his own faith journey.

Consolmagno now serves as the director of the Vatican Observatory, a position he took over in September 2015. He has conducted research at the observatory since 1993 with the Vatican's 1.8 meter telescope in Arizona.

At Rockhurst, he told the students about his struggles early in his college years.

But through it all, Consolmagno was able to focus on his passions. While some may argue that science and religion are at odds with each other, he reminded the students at Rockhurst that you can follow your dreams, whatever they are, and still maintain your relationship with God.

"If you don't learn to dream, and you don't know how to interpret your dreams, then you won't know really what it is that God wants us to be."

KANSAS CITY, Mo. -- A pedestrian was hit and killed Wednesday night on Interstate 435, Kansas City police say. The incident happened just after 10 p.m. near Front Street. Details about what led up to the crash were not immediately available. FOX4 will update this story as more information is confirmed.

KANSAS CITY, Mo. — Missouri school districts will be allowed to have students attend every other day and learn remotely on alternating days, helping schools avoid fund penalties related to attendance. The State Board of Education passed two emergency rules Tuesday establishing hybrid instructions models for districts that want them, paving the way for districts to reopen schools, according to KCUR. Deputy Education Commissioner Kari Monsees said the new rules…

KANSAS CITY, Mo. — COVID-19 testing isn't easy for some people to get, especially those in rural counties.  And some who are getting tested are waiting way too long for results. "For those of us I guess you could say in more rural counties, it is not easily accessible to be able to get testing and results in a decent amount of time,” said Sarah Taillon, who lives in Cass…