KANSAS CITY, Mo. — Kansas City police say the threat against Northeast High School, 415 Van Brunt Blvd.,  that concerned the community on Tuesday, actually originated in another region of the country that also has a school named ‘Northeast’.

Police say the threat was then shared on social media, picked up locally and spread in Kansas City, Mo.

The threat said: ‘Be prepared to be shot down… during a block lunch approximately 10 minutes after the bell only aiming for XXXXX though.’

Events surrounding today’s believed threats against the NE High School were met with immediate response from the KCPD and the School District. Investigation revealed the origin of the threats to have been generated in another part of the country, directed against a similarly named school in that region and not against our local NE High School.

That particular threat was then picked up upon here in KCMO and sent out locally. The person believed to have resent that threat locally has been contacted and is cooperating with the investigation.

These catastrophic school shootings continue to shape a heightened awareness locally and across the nation. The KCPD routinely trains to prepare response for this type of crisis. Along with community partnerships, we provide our schools unique training and community resources to improve overall security/safety planning.

Tuesday morning, Kansas City, Mo. School District leadership said they were aware of a threat and reassured parents and students that they and police are investigating.

They placed the school on a ‘no entry status’ and said Northeast would be operating as a normal day, except for not allowing visitors. They also called in extra security to the high school. The school was already on an intruder drill Tuesday morning, which they do twice a year with a company called Strategos.

Colon did not say where the ‘other’ Northeast High School is located. 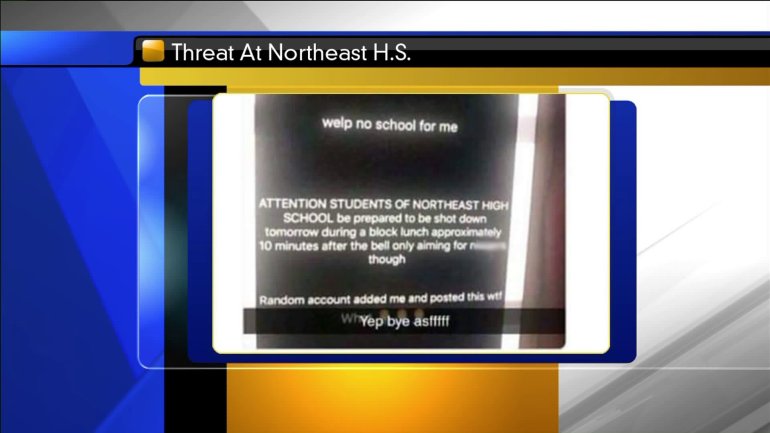