KANSAS CITY, Mo. — Halloween is a time when most people like to get scared.

Parents say a tradition in the neonatal intensive care unit at St. Luke’s Hospital on the Plaza actually helps take some of the terror out of what they’re facing.

“It takes the edge off the scary things and brings some light to a scary time,” Brianna Hoden said. 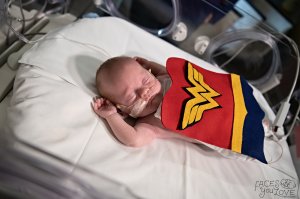 Hoden’s daughter, Nicklyn, weighed 1 pound, 11 ounces when she was born in August.

Each October, nurses and volunteers dress up each newborn in their first Halloween costume. Professional photographers take each baby’s picture to make sure parents have a memory of the milestone.

Hoden said she and Nicklyn’s father chose a Wonder Woman costume for Nicklyn this year.

“We felt it was fitting for what she’d been through and what she’d accomplished so far,” Hoden said.

For other parents, the tradition and photoshoot is a look ahead and hope for the future when they get to take their babies home.

Megan Jasperson said she knows what each parent with a child in the NICU is experiencing. She delivered both of her children early and spent months with them in the NICU. 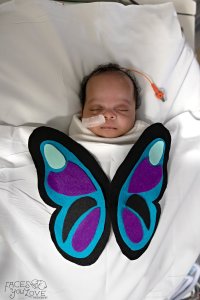 Now Jasperson volunteers at events like this one. She hopes her presence gives parents hope that there is a future outside of the hospital.

“Seeing the babies all dressed up gives us a sense of hope,” Jasperson said. “They hope next year babies can be going through the candy and all over and enjoying Halloween.”

Just like Aubrey who started her life as a butterfly and turned into a Ladybug.

Crew celebrated his first Halloween as a Chiefs player and turned into a skeleton this year.

Wonder Woman was Myla’s first costume, and this year she chose her own.

William showed the NICU his Superman powers and now can’t wait to trick-or-treat as a dinosaur.