CHILLICOTHE, Mo. — Two children, who lost three siblings and a cousin in a house fire in Trenton, Mo., in May, have been removed from their parents’ home and placed in protective custody in Chillicothe.The parents, Jamie Hughes, 26, and Tim Hughes, 25, each face a charge of endangering the welfare of a child. Tim Hughes also faces a charge of resisting arrest.

According to the probable cause statement,  officers with the Chillicothe Police Department responded to the home on October 5 after someone called the child abuse hotline to report information.

Officers say when they arrived at the home they recognized the parents from the deadly fire and a previous investigation. That fire happened on May 2, 2015 at about 1 a.m. at the Hughes’ home in the 1300 block of Norton Street in Trenton, Mo.  Flames and smoke poured from the second floor, where four children were asleep. The four children died in the fire: Seven-year-old Rosanna (who went by Anna), six-year-old Rolanda (who went by Landi), four-year-old Mason, and their cousin three-year-old Saylem.

Four of the Hughes’ five children were home that night. The two-year-old girl slept downstairs and survived. An older brother was sleeping at a friend’s. Saylem’s mother, Sylvia Nichelson, also lived in the home. When the fire broke out, she and her sister were able to get out.  Family members say Timothy Hughes used a ladder and broke the second floor windows to try to save his children, but it was too late.

On May 11, the Division of Fire Safety said it had listed the fire as accidental. They said the fire originated near the ceiling in the south upstairs bedroom, near the stairwell. There was evidence of an electrical shortage.

During their recent visit to the home following the hotline tip, officers say they noticed the two-year-old girl sleeping in a recliner in the living room, where officers claim they also saw marijuana and drug paraphernalia in plain view.

Police say they questioned the parents about reports that one of their children had difficulty breathing. They say the parents answered that they did not have money to provide necessary medications for the children, unable to purchase an inhaler due to health insurance problems. However, officers noted in their report that they found multiple prescriptions in the house for Timothy Hughes including Xanax and Tylenol with codeine.

One officer says she also discovered power saws and other cutting devices in the nine-year-old boy’s bedroom.

When officers told the parents that the house was not safe for children and would be taken into protective custody, officers say Timothy Hughes “took a defensive stance in front of the door of the residence and stated to workers… that we were not taking the children,” according to the probable cause statement.

The officers reportedly told Timothy to cooperate or face arrest, but they say he once again told them that they were not taking his kids.

The officer then reports that he grabbed Timothy’s right wrist in an attempt to arrest him but that he continued to resist until the officer drew his taser and threatened to use it if Timothy did not comply.

After the arrest, the Department of Family Services went to collect the children, but the two-year-old girl continued to sleep, they say.  According to the probable cause statement, the child “woke up in a dazed state and did not appear to be responding appropriately for a child that age.” The document says bruises were found on the child’s body and it appeared the child could have been under the influence of unknown medications.

The prosecutor in Livingston County has the case.  Trenton is about 24 miles north of Chillicothe, about 100 miles northeast of Kansas City. 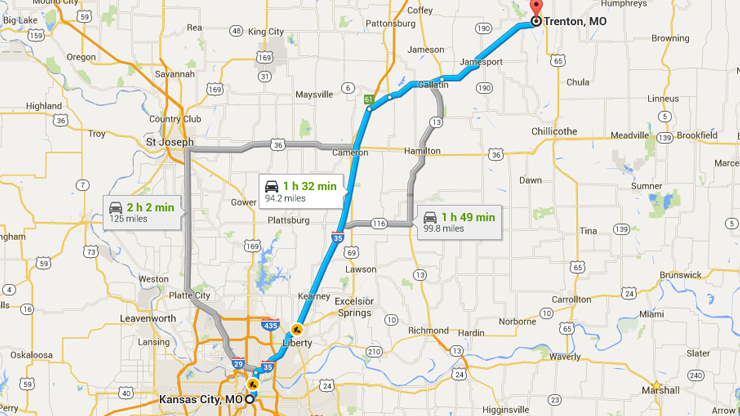 Chiefs Fans: The Next Generation Looks to Super Bowl …