TRENTON, Mo. — A Trenton, Missouri police officer is continuing her recovery after being shot in the stomach over two weeks ago.

Trenton Police Officer Jasmine Diab posted on Facebook Friday that she was being transferred to a rehab facility.

Diab said this is her first big step to being able to go home.

“It’s supposed to be intense so wish me luck,” she wrote. 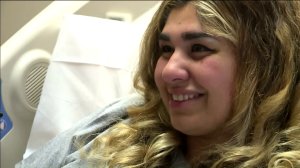 Diab was transporting an inmate when he allegedly shot her in the stomach on June 14. She lost a dangerous amount of blood, and had a 20% chance of survival, according to doctors.

Now, she’s getting stronger, a feat she says she could not have done alone.

“When I first woke up, I had the tube in, and I didn’t feel like myself, I was just really scared,” said Diab while sitting in her hospital bed.

In the moments following the shooting, Diab said she remembers everything being gray. Her odds of living were slim, but Diab was fighting hard, with one particular person in mind: Her 5-year-old daughter.

“I remember I felt like I wanted to go to sleep, and I heard her say, ‘Where is my mommy?’ I was in and out of consciousness. I know she needs me,” said Diab.

The next few days would be extremely rough. She was unconscious for two days and had three emergency surgeries. But besides the outpouring of love and support across the country, Diab credits her intensive care nurse for helping her pull through one of her darkest moments.

“The ICU team was prepared for her. We didn’t know how she would pull through, but two days later, I go straight to her room, and she was alive, and she smiled,” said Achacha, Diab’s ICU nurse.

Achacha and Diab would become inseperable, even when Diab was checked out of ICU. The two even sharing matching bracelets.

Diab said she’s still overwhelmed by the support. Balloons, stuffed animals and flowers still fill her room, providing a small display of love from around the country.

She said she was sworn-in as an officer two years ago, and is now determined more than ever to be a good officer in the years ahead.

“I knew the risks when I became an officer, and it hasn’t changed. I want to protect my community.”