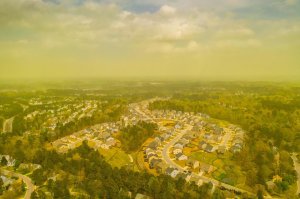 #ThePollening. It sounds like an M. Night Shyamalan horror film.

If you suffer from pollen allergies, just looking at the above photo may make you want to choke.

It was taken Monday by photographer Jeremy Gilchrist, who used a drone to snap aerial pictures of the yellowish green haze blanketing Durham, North Carolina. The pollen wasn’t just coating cars and patio chairs — it was hanging thick in the air.

Gilchrist told CNN he was driving around when he noticed a green cloud in the air.

“It was surprising to see it up that high,” he said.

He’s seen pollen shrouds like this before in North Carolina, but from the ground it’s difficult to capture their sheer magnitude. So he sent up his drone to a get a better vantage point.

The photos look almost like they’ve been filtered on Instagram. But Gilchrist says he only lightly edited them before posting them to social media. Seen from the drone’s perspective they looked “pretty dull,” he said, so he added contrast to bump the photos back to the levels usually apparent to the naked eye and resembling how the pollen cloud looked from the ground.

Gilchrist, who has also worked as a meteorologist and storm chaser, said pollen can collect in high concentrations in the air like this depending on the amount of recent rain. Yesterday, which was “breezy and dry,” helped create the ideal conditions for pollen granules to congregate.

He said thunderstorms hit two hours after the original photos were taken. The strong winds swept away the pollen in the air, and the downpour washed away much of the pollen that had settled on the ground.

The official pollen count in Raleigh, North Carolina, about 20 miles away, was 1778.8 grains per cubic meter of air yesterday, according to North Carolina’s Department of Environmental Quality.

That count is considered “very high” and tops the charts for the city so far this year. The pollen spike over the last week comes primarily from the area’s trees, which include pine, oak, mulberry, birch and sweet gum.

In the latest Weather Channel numbers Tuesday, Raleigh ranks fifth in the nation in pollen severity. Tulsa, Oklahoma, tops that list, followed by Waco, Texas; Springfield, New Jersey; and Georgetown, Texas. The Weather Channel classified the breathing-comfort level in Raleigh Tuesday as “fair” but said it would go down to “poor” on Wednesday.

The haze this week isn’t the worst ever recorded by scientists in Raleigh. In 2010, they recorded a count of 3,524 grains per cubic meter, nearly double the count this week, CNN affiliate WRAL reported.

But the Raleigh-Durham area isn’t typically known for being especially nightmarish for allergy sufferers. In its 2018 “Allergy Capitals” report, the Asthma and Allergy Foundation of America ranked Durham 67th and Raleigh 92nd nationwide in allergy severity.