NEWBURGH, N.Y. — Two boys have something to be thankful for this year following their rescue after spending hours buried under a pile of snow in New York. 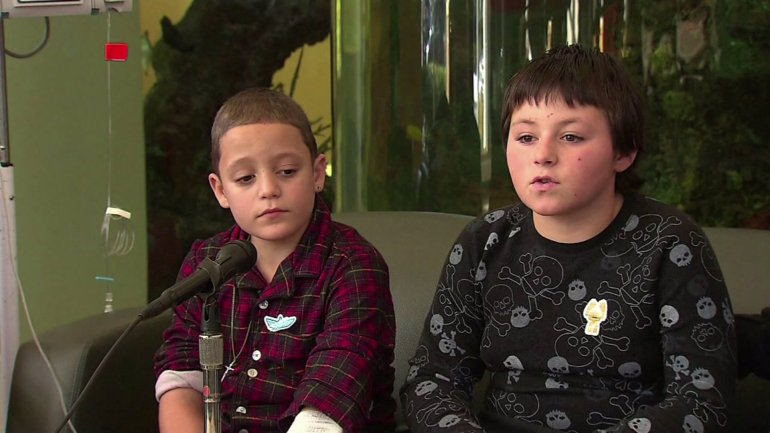 The boys are cousins, ages 9 and 7. They were building a snow fort Wednesday evening when a snow plow came through a parking lot near their homes in Newburgh.

It pushed even more of the white stuff into the snowbank in which they were playing, leaving them trapped underneath the snow for several hours, according to police.

Newburgh, about 60 miles north of New York City, got more than 6 inches of snow that day.

“The (plow) operator would have had no knowledge that the boys were on the other side of the bank,” Newburgh police said in a statement.

“We started screaming and telling him to stop, but he didn’t hear us,” said Elijah Martinez, 7.

As hour after hour passed, the boys became increasingly desperate and cold. The space was so tight, they say they could only move their legs.

“My throat was hurt and I was like, gasping for air,” said Elijah. “Then I punched up toward the hole and made a little tiny space.”

“I was thinking that me and my cousin was gonna die,” said Jason Rivera, 9.

Not only was the plow operator unaware, so were their relatives, who didn’t report them missing for several hours.

It wasn’t until the boys didn’t return home at 10 p.m., police said, that both families became concerned and started searching the neighborhood.

After failing to locate them on their own, they called the police nearly two hours later.

Nine officers and a police dog canvassed the area into the early hours of Thanksgiving morning, when they learned that the pair had been building a fort in the parking lot.

A massive search effort began with over 30 people from the community coming out to search. Finally, at about 2 a.m., Officer Brandon Rola approached the snowbank and ” found a shovel that was half-buried,” and sprung into action, using it to dig into a bank until he spotted a possible sign: a small boot.

‘Digging out … with their hands’

“Officers, family members, community members, and mobile ambulance personnel assisted in digging out the boys with shovels and with their hands,” police said.

“Fortunately, they were alive and well,” Rola told CNN affiliate WCBS. “And the police got a big round of applause,”

“They were probably in about five feet of snow,” Sgt. Aaron Weaver said. “But how ever it fell, there was, like, a dome around their heads, so there was air in there, like space for them.”

Both were conscious and alert and taken to the hospital for observation. Family members told the affiliate Thursday that they were both in good condition.

“ I felt so happy. It was like everything we went through just, pffff, fell right off my back,” said Elijah.