Joseph E. Wyatt, 28, and Ronar Santiago-Torres, 27, are both charged with first-degree robbery,  armed criminal action, first-degree burglary and kidnapping. Prosecutors have requested a bond of $500,000 cash for each.

Court documents say the victim’s friend called police when she observed unusual activity via a remote video feed of the victim’s home in the 3600 block of South Delaware Avenue.

According to prosecutors, one of the two men charged admitted to going to the home to rob the victim and restraining and holding him at gunpoint. They said they repeatedly struck the victim and when they heard police sirens they stole the victim’s car and fled police.

The homeowner told police two men, whom police later identified as Wyatt and Santiago-Torres, knocked on his door and said they were looking for a lost dog. The two men also mentioned they were offering gutter cleaning. The homeowner said he sent them away, but a few minutes later one of them returned. The homeowner said when he opened the door for the second time one of the men had a black semiautomatic handgun with a long barrel and warned that it had a silencer on it. The suspect claimed he could shoot the homeowner without anyone hearing it.

Wyatt and Santiago-Torres then forced their way into the home and pushed the homeowner up against a sliding glass door where they began beating the him, the homeowner told police. He said they tied his hands in front of him with Zip-Ties and demanded that he direct them to his safe.

The homeowner told police one of the men held him at gunpoint while the other ransacked his home.

Once the suspects found the safe, they demanded that the homeowner tell them the combination, according to court documents. When the homeowner claimed he didn’t know it, they beat him again and threatened to kill him. That’s when the victim’s friend noticed the unusual activity and called 911.

Court documents say when Wyatt and Santiago-Torres heard approaching sirens they asked the homeowner where his keys were, then went out to his garage.

Police said the suspects crashed the vehicle through the garage and led other officers on a high-speed chase.

It ended in a crash off South Cedar Avenue about 3.5 miles away. 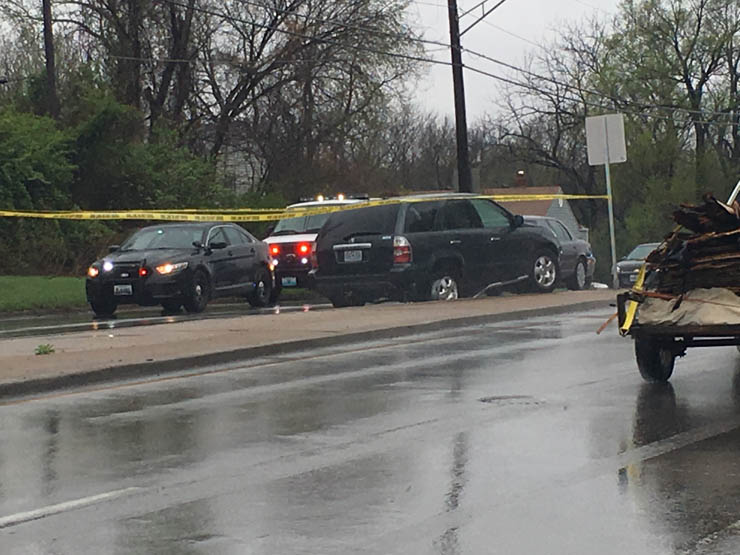 The stolen car and a police cruiser were both wrecked, but officers arrested Wyatt and Santiago-Torres. According to court documents, Wyatt had a handgun when taken into custody. That handgun traced back to the victim.

So far neither of the men has been specifically charged with shooting the officer. They’ve only been charged in connection to the events surrounding the shooting.

Neighbors say the homeowner was in his house during the burglary and looked a bit battered and bruised when police escorted him out.

“I saw a gentleman in a red shirt being brought out of the house,” said Kathryn Tempel, a neighbor. “Later I thought I saw him standing, talking to police, so I don’t think he was the bad guy, I think he might have been the homeowner.”

Expect continuing coverage on fox4kc.com. If you’re a Facebook user, check our Facebook page for live reports there as well. Download the app for news in between FOX 4 newscasts.

As of Thursday just after noon, Officer Wagstaff was still in critical condition. Officers from around the metro gathered Wednesday night to pray for his recovery. Officer Wagstaff is married with two boys.

Thursday morning, Kansas City Police sent the wrong picture of the suspect, whom they identified as Joseph Wyatt. Then, at about 12:55 p.m., we received an email from KCPD, saying they’d provided us the wrong picture. For clarification, the person shown earlier on FOX 4 and fox4kc.com was not Joseph Wyatt. From KC Police: “Correction!!! WRONG pic sent earlier. The correct Joseph Wyatt pic is attached. Sorry for the confusion,” said Darin Snapp, KCPD spokesperson.

INDEPENDENCE, Mo. -- Some Jackson County high school seniors are now getting a chance to return to the classroom full-time. Independence Schools believe what's happening in the district could serve as encouragement to districts across the metro.

Inside Truman High School, small groups of students are able to sit spread apart. Even busy hallways are not crowded. That's because the district split its middle and high schoolers in two groups, with half of students attending in-person on alternating weeks.

KANSAS CITY, Mo -- For many in the metro, one of the most difficult things about the COVID-19 crisis is not seeing loved ones who live in long-term and senior living facilities. But that wait is now over.

The state of Missouri has come out with guidelines for these facilities to allow indoor and outdoor visitations, but not everyone is supportive of the move.

But there are several requirements facilities must meet first. Visits can only happen if the facility has no new COVID-19 cases for two weeks.

Pumpkin patches, haunted houses, all the fun things to do to kick off fall in Kansas City