Simmons was shot leaving an off campus party just hours after his best friend and teammate Corey Ballentine was drafted into the NFL by the New York Giants. Ballentine was also injured in the shooting.

“We mourn together the passing of our student, our friend, our brother, Dwane Simmons,” Dr. Jerry Farley, Washburn University President said with Simmons’ No. 17 jersey draped over the podium in front of him.

Washburn Football Coach Craig Schurig said he was initially unsure whether the Lee’s Summit West grad, who didn’t earn a scholarship, would ever play for the team.

“Those little candles that we have, they look kind of like Dwane to me — small, skinny, but man those things are powerful,” he said.

Simmons overcame two ACL injuries to earn a starting spot opposite Ballentine, who he was celebrating with that night Simmons died.

“He had all this prize, all this that he fought for. Then he had a great day. His best friend gets drafted,” Schurig said.

Schurig called on the university and city of Topeka to work together to improve security in the area where the shooting happened and many student-athletes live, now known as “Washburn North.” 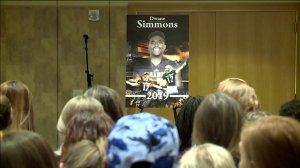 “There are some things we have to do to make a change, starting off with if you were at the party and know something, say something,” Missionary Baptist Church Rev. T.D. Hicks said.

Teammates walked out of the vigil in tears and joined Simmons’ family on the football field, the spot Schurig called Simmons’ “heaven,” as a rainbow formed over them.

“Out of tragedy come triumph; out of misery comes a message; out of loss comes victory,” Hicks said.

Those who wish to donate can do so either at the Topeka Vision Bank located at 3031 S.W. Wanamaker Road or at 712 S. Kansas Ave. Donations will also be accepted online through a GoFundMe page.