ASHEVILLE, N.C. — It was a telltale sign the party was coming to an end: The police showed up.

But when cops in Asheville, North Carolina, responded to a complaint about a giant slip-and-slide that had been set up for a Fourth of July block party, they did the unexpected: They took a ride themselves.

Resident Katlen Joyce Smith said one of the local dads decided to build a slip-and-slide for the neighborhood kids to enjoy during the annual block party.

In the middle of the party, two officers showed up. They had received a complaint from one of the neighbors that the DIY water slide was blocking the road, Asheville police said.

“When the police came, they quickly realized that wasn’t the case and asked if they could take a turn,” Smith said.

“We looked at it and determined it wasn’t really an issue,” Officer Carrie Lee said in a video the police department posted on Twitter. “So the first thing I said, I said I’m not here to break up your fun.”

In videos of the event, Lee can be seen using a trash bag as her raft while Officer Joe Jones slides down in an inner tube with one of the neighborhood kids.

“I still can’t handle the amazing-mess of it all,” Smith wrote in a Facebook post. “I hope the neighbor who called them saw it all go down!!” 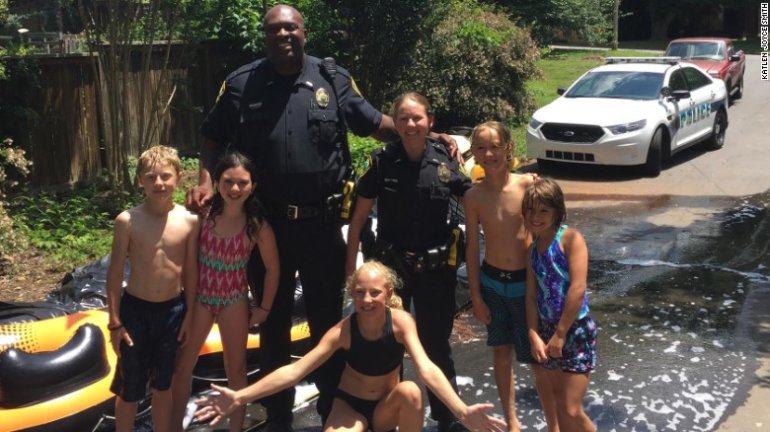 Jones said while going for a ride wasn’t his idea, he didn’t have much of choice.

“I thought I was going to be able to get out of it, because I’m too big to fit in a trash bag,” he said. “But then when the kids pulled out this big raft … I had no choice.”

In the video, Jones’ raft can be seen splashing into a small pool at the bottom of the slide.

“My butt is wet,” he says to laughter.