KANSAS CITY, Mo. – Westport patrons had mixed reactions on Thursday when they learned security screenings are returning to the KC entertainment district this weekend.

In an email, a spokesperson with the Westport Regional Business League said they only had a few weekends last year to test the new “enhanced security measures,” but they believe they’ve fixed the glitches.

Starting April 5, visitors heading to Westport between 11 p.m. and 3 a.m. on Fridays and Saturdays will have the option to go through six security checkpoints. There were only four security entrances last year, and it often led to longer wait times.

“It’s always been a hassle, hard to find parking and the security kind of put me off,” Chris Hosmann said.

“It was a little annoying because I do want to do what I want to do and I’m safe, but you don’t know if other people are safe, too,” Alexandra Hartog said. 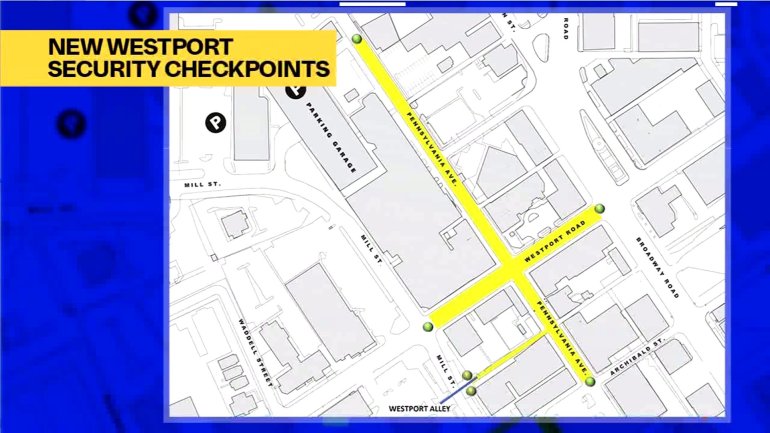 The new checkpoints will be on either side of the Westport Alley off Mill Street in front of Johnny Kaw’s Yard Bar.

Visitors will also see double the number of metal detectors. The enhancements are projected to get crowds through security four times faster than last year.

“[I think] that’s going to mean more business because I know that some people just tend to up and leave whenever they’re like, ‘Well, I’ve been waiting here for a really long time,’” Hartog said.

“Be prepared. Have your stuff ready, and you’ll get right on through, you know,” Tyrie Woodbury added.

The screenings started last summer as a response to a growing trend of shootings and violence in the entertainment district.

When the city council agreed to privatize streets and sidewalks in Westport back in 2017, it opened the door for police officers to set up metal detectors and screen visitors for weapons during the late-night hours.

The screenings will run through October.

There are dozens of items that aren’t allowed in Westport during the security screening times. See a full list of items here.

CLEVELAND -- A demonstration in downtown Cleveland in response to the death of George Floyd in Minneapolis police custody escalated Saturday afternoon.

It began calmly with speeches and signs at the Free Stamp, Nexstar sister station WJW reported. As one group marched to Public Square, another stayed near the Cuyahoga County Justice Center.

KANSAS CITY, Mo. -- Mayor Quinton Lucas, while participating in a protest on May 30 over the death of George Floyd, condemned protesters involved in vandalism.

"What we are not out here to do is to act a fool, is to have generalized hooliganism, is to do something that would, I think, tarnish, not just the life of George Floyd, but also tarnish, I think, what is a wonderful and peaceful rally that we have," Lucas said.

WASHINGTON D.C. -- President Donald Trump praised the U.S. Secret Service for it response to overnight protests outside the White House, saying protesters would have been met with "vicious dogs" and "ominous weapons" if they had managed to breach the fences.

The unrest came as demonstrations erupted in cities across the United States in response to the death of George Floyd, an unarmed black man who died after a white officer kept his knee on Floyd's neck for several minutes.