KANSAS CITY, Mo. — When you think of eastern Kansas and western Missouri, earthquakes don’t exactly come to mind in these parts. But they do happen, and they will happen again somewhere in the future.

Typically, earthquakes in the metro are more of a curiosity. 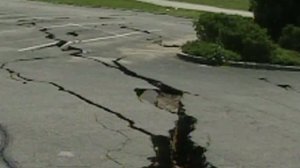 In 2016, during a FOX4 Saturday morning newscast, a rather strong earthquake, measuring 5.8 on the Richter scale, hit Oklahoma — some 200 miles away from KC. But it was felt all the way into the metro area. Other earthquakes have hit Oklahoma and Kansas over the years.

Most geologists agree they’ve been mostly triggered by mankind and the injection of brine back into the ground to get oil out.

Although not as famous as the New Madrid fault in southeast Missouri, there’s actually another fault though closer to Kansas City in eastern Kansas, called the Humboldt fault. It stretches from southeast Nebraska to near Manhattan to east of Wichita.

Although docile most of the time, the largest Kansas earthquake to ever occur happened on this fault in 1867 near Manhattan.

Want to learn more about earthquakes in Missouri and Kansas? Watch the video above for the full report from meteorologist Joe Lauria.

HB 825 passed the House Thursday and is now in the state Senate.

LAS VEGAS – The Las Vegas Raiders received immediate backlash for a tweet the organization posted following the Derek Chauvin verdict. The former Minneapolis police officer was found guilty on all three charges in the death of George Floyd.

The Raiders posted a graphic that reads "I CAN BREATHE," with the date of Chauvin's conviction underneath, KLAS reports.

A bidding war is breaking out for Kansas City Southern, with Canadian National Railway making a $33.7 billion cash-and-stock offer for the railway.

The bid trumps a $25 billion cash-and-stock proposal made by Canadian Pacific last month.