“His parents, my parents, our entire family back home is in grief,” said Sunayana Dumala, Kuchibhotla’s wife. “I don’t know what answer I have to give to his mother of why I was not able to save him.”

Dumala said her husband was a hard worker who would often times spend late nights working at Garmin. 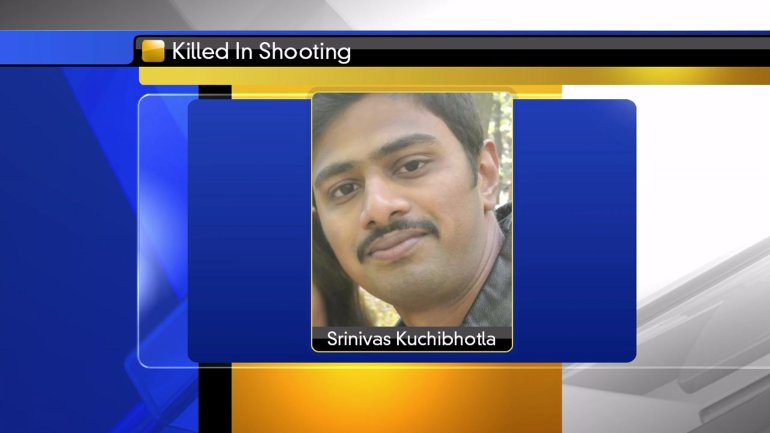 “He used to go to work and come home at two or three in the morning,” she said. “A person like this did not deserve something like that.”

Alok Madasani, who also works at Garmin, sat near Kuchibhotla’s wife at the news conference on Friday. He was also shot at the bar and was released from the hospital on Friday morning.

“That guy came back and he did what he had to do,” Dumala said. “He has taken a life, a very lovable soul.”

Dumala expressed her heartbreak over witness reports that the suspect shouted for the men to get out of his country.

“What is that they’re going to do to stop this hate crime? As much as I know my husband, he would want the justice to be done,” she said. “He was just enjoying his glass of beer to get off from work stress, have some fun with his friend.”

Dumala said her husband and her were hoping to expand their family and have a baby. The couple had been married for four years.

The FBI is looking into the deadly bar shooting as a possible hate crime. It got involved after witnesses reported the suspect, Adam Purinton, used racial sluts before he shot the two men. Purinton is currently being held on a $2-million cash bond. He is expected to make his first court appearance on February 27 at 1:30 p.m.