Editor's note: There is graphic content in the video, viewer discretion is advised.

KANSAS CITY, Mo. -- Every year, an average of 33 people die after being shot by police in Missouri and Kansas combined.

With increased scrutiny of these shootings, and some officers now facing criminal charges for their actions, there's a growing emphasis on how police are trained.

FOX4 is taking a closer look at the technology helping teach officers to make smart decisions on the street.

Rhodenbaugh was about to go through his first-ever firearms training simulation at the Regional Police Academy.

“It is integral into the whole use of force and how we use force and proper communication,” said Sgt. Ward Smith with the Regional Police Academy firearms training section.

David gets a quick briefing on the call he's heading to.

The cadet gave repeated verbal warnings to the suspect, and suddenly, the suspect is seen whipping around. What would you do?

“Sir! Get your hands out of your pockets!” the cadet said.

“What do you want?” the suspect asked.

“Sir, I need you to drop the beer can. Put your hands out to your sides,” said Rhodenbaugh.

The cadet cued into some key things. The subject was rude, but not combative or threatening. And the shiny object in his hand wasn't a weapon.

“You can see it’s a beer can,” Rhodenbaugh said.

The second scenario he faced was a traffic stop.

“Don’t you have anything better to do (sic)?” the suspect said.

It gets heated fast.

“You know I'm not taking this anymore,” the suspect said.

As an officer, how would you react?

“Sir, come towards me! Come towards me, sir,” the cadet said, before firing several shots at the suspect, who drew a gun from inside his vehicle.

It turns out the cadet caught two crucial warning signs. Right when the traffic stop started, the passenger ditched the truck and took off running.

And within seconds of the stop, the driver said, “I’m not taking this anymore.”

“That’s a good indication he’s probably going to be uncooperative, and he’s reaching back into his vehicle. What do you need in there?” Rhondenbaugh said.

Adrenaline and stress alter how you react. Reviewing his response, instructors show the cadet would've actually been shot once before taking the suspect down.

“When we ramp you up past a certain level, we know a different part of your brain is in charge. And when that happens, we do things that people would look and think -- why in the world would that person do that?” said Sgt. Smith.

The cadet’s heart rate after his first go was over 100 beats a minute, well above resting rate of 60.

“It scared me,” Mashek said. 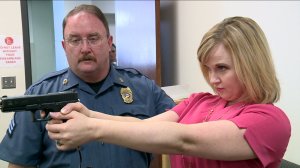 Instructors then put Kera through the paces.

“That’s perfect sight line. Go ahead and pull the trigger once,” said Smith. “Good,” he said.

“Obviously, I have zero law enforcement training so when I go through this, how would you suggest I think about these situations?” Mashek said.

“The standard that we’re held to is reasonableness. And reasonableness is fairly common amongst most people. We’d look at something and even as a police officer, I’m going to look at it a certain way and then describe it to you, and you’re going to go, ‘Oh that’s probably reasonable,’” Smith said.

“This is the police. Can you talk to us? We need to see you and make sure everything’s okay,” said Mashek.

She admits she panicked and tunnel vision set in, only able to focus on a gun to a woman’s head.

“Drop the firearm!!” said Mashek, before firing off two shots toward the suspect.

Mashek said, “My heart sunk when the suspect dropped. He'd taken out the hostage. And I’d missed three huge cues from the get-go.”

“The suspect is screaming at somebody inside there and what he says is, ‘You’re going to do what I say or I’m going to kill you,’” said Sgt. Kelly Clark, with the Regional Police Academy training division.

“In the heat of the moment, I also didn't hear a baby’s cry or spot a car seat on the counter,” Mashek said.

“You always have to think of what's beyond your target. So what’s beyond?” Clark said.

That’s why instructors put recruits through scenarios like these dozens of times, and current officers use the simulator as part of their re-certification.

“The consequences for making a mistake in that room are fairly mild. Instructor’s going to give you some feedback, and ways to correct what you’re doing, but the consequences for doing something wrong in a real scenario when you’re out dealing with the public, are fairly significant,” said Smith.

The more officers train in these virtual scenarios, the better equipped they are to notice every little detail in their real-life surroundings and be able to handle high-stress situations.

“It’s become a new normal for you. You’re used to that pressure,” said Smith.

After each scenario, instructors talk about ways it could’ve be handled differently, with an emphasis on de-escalation.

“We try not to ramp people up. We try to get them to come back down,” Smith said.

“We make decisions based on the information we have at the time,” Smith said.

While we can all sit back on watch videos after a police shooting happens and form an opinion, Smith likens it to a referee reviewing a play.

Seeing what these officers go through to prepare, just might give you a better sense of how much they`ve got to absorb to make a decision that will hopefully bring the best and safest resolution.

The Regional Police Academy will soon upgrade its shooter training simulator. The new equipment will have cameras on the officers to view how they're responding, and it will also give officers the option to use other tools, like chemical spray or a Taser.

SAN DIEGO - A San Diego woman was reunited with her dog after police say he was stolen and his captor asked for cash in exchange for his return.

Alejandra Casey and her three-year-old dog, Paco, a rescue from Tijuana, were running errands Monday morning at a shopping center in Rancho Bernardo.