KANSAS CITY, Kan. -- Kansas City, Kansas, police shot and killed a man they say was heavily armed Tuesday morning and shot at them.

That man also told a hotel manager he killed his wife and was headed to Legends Outlets with an assault rifle. A witness told FOX4 that the man who made the threats matched a photo of Charles Roy Pearson, a 51-year-old man from Lenexa.

FOX4's investigative team found a mugshot of Pearson and showed the witness, who said there was no doubt he was the man police shot and killed.

Pearson told a hotel manager before the shootout that he killed his wife, was dangerous and that the manager needed to call police. Then the witness said he went out to a red Maserati and peeled out of the parking lot.

Kansas City, Kansas police say they are investigating to see if these incidents are related.

Events that led up to the shooting

Officer Jonathan Westbook said KCK police were called at 9:42 a.m. to the Country Inn and Suites in KCK.

“The manager advised that a heavily armed subject came into the hotel and advised that he committed a crime, our officers came out this way," Westbrook said. "We located the subject and he fired at us and we returned fire, he is deceased.”

No police officers were injured in the shooting. Police also said it is early in the investigation.

Westbrook said when officers encountered the suspect, he was armed with an assault rifle. 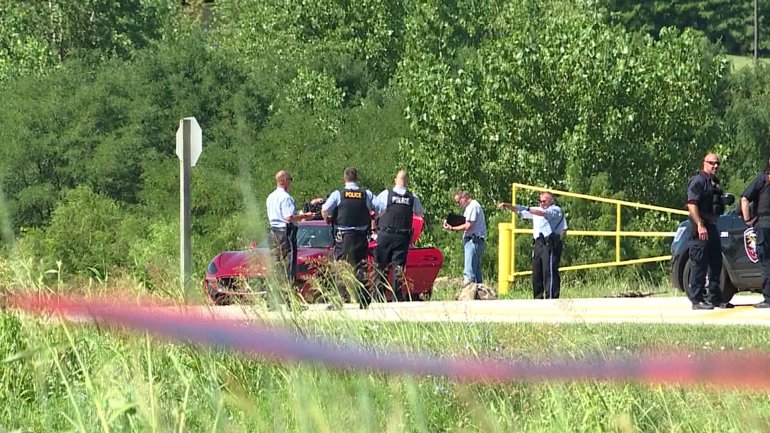 “We were advised that he had an AR-15, when we engaged the subject he did have an assault rifle, he fired at us and we did return fire and he was struck," Westbrook said. "None of our officers were struck, all of our guys are okay.”

KCK police are conducting their investigation around the vehicle the suspect was driving.

There was a lot of chaos in the busy area when police arrived. A Cerner employee told FOX4 the KCK location was on lockdown due to the police activity in the area, but it was lifted.

The Legends Shopping Center was also on high alert, but police said the suspect was never actually at the Legends.

FOX4 has multiple reporters continuing to work on this story. We'll have updates as we get them online, and live reports during newscasts at 5 and 6 p.m.