KANSAS CITY, Mo. -- Investigators working to determine how Janina Vasquez ended up dead in a well at Berkley Riverfront Park released surveillance images where she was seen at the Isle of Capri Casino. The images were captured a week before her body was found.

Vasquez was found on February 19 and seen leaving the Isle of Capri Casino on February 12 at about 7:40 p.m. Detectives say she got into a red car driven by an unknown person, and they want to speak with that driver or anyone who saw her get into the car. She was wearing a hooded jacket, grey sweatpants and burgundy colored boots that night.

Vasquez's mom, Jennie Cochran, said her daughter left their Overland Park home on February 11 and sent her stepfather a text message around 10 that night saying she was spending the night with two people named Allen and Nicole. Cochran said her daughter only planned on being gone one night.

"I don't know who Allen and Nicole are, but I think she may have been enticed out of the house," Cochran previously told FOX 4. 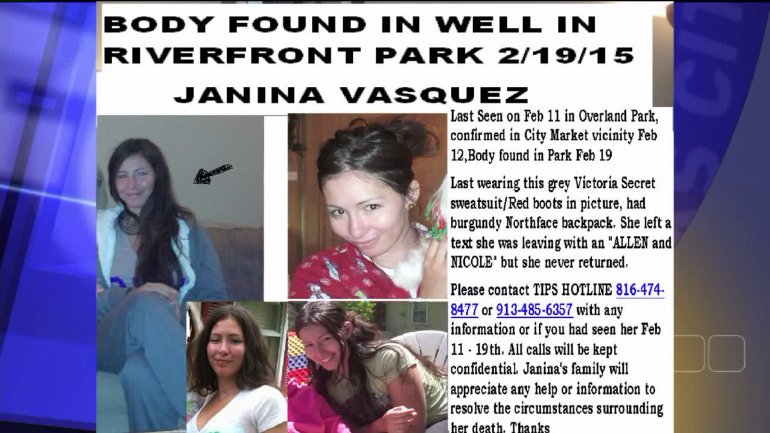 Cochran said that detectives told her on February 12 that Vasquez's cell phone was pinged near the intersection of Third and Cherry streets in the River Market area, prompting her to file a missing person's report.

Vasquez was found in the well and wasn't wearing any underwear or socks and had her sweat suit jacket tied around her waist. Cochran also said that her daughter suffered a severe injury to the back of her head and wrist fractures.

"It's been a nightmare; just that area and knowing that she was cold and frozen and alone. Obviously she got mixed up with somebody, something happened," Cochran said.

KANSAS CITY, Mo. -- A mix of emotions inside Arrowhead Stadium as the Chiefs beat the Buffalo Bills 38-24 Sunday. Elation for the Chiefs players and fans while the Bills realized their hopes to reach Super Bowl LV ended in Kansas City.

Those emotions boiled over with 3:19 left in the game. Bills quarterback Josh Allen was sacked by Tanoh Kpassagnon. Alex Okafor finished off the tackle, and Allen pitched the ball in his face in resentment. Offensive linemen Jon Feliciano and Dion Dawkins rushed in and leveled Okafor, resulting in a flood of offsetting personal foul penalties.

KANSAS CITY, Mo. -- Super Bowl LV will be a matchup like no other. Mahomes versus Brady. The great against the future.

Minutes after winning his second trip to a Super Bowl in as many years Sunday evening, Chiefs quarterback Patrick Mahomes talked about what it will mean to face Tom Brady in Tampa.

We're Weather Aware Monday into early Tuesday as a major winter storm impacts the plains. While the immediate metro isn't under any advisory or warning at the moment, I don't think that's reason to ignore Monday. Very heavy snow is expected Monday for areas north and west. Don't be fooled, just because we're not under some advisory or warning right now, doesn't mean we won't be impacted. Just a matter…