MISSION, Kan. -- The victim of an attempted abduction outside a metro grocery store is sharing her story a day after her terrifying ordeal. Ashlee McGhee says she fought back against her abductor, and is telling her story in hopes that it will help future victims survive similar attacks.

Police say the attack happened around 7:20 on Monday night in the parking lot of the Hy-Vee on Martway.

"At first I didn't even think it was real," said 24-year-old McGhee.

A nightmare came to life when she was attacked by a 33-year-old man. McGhee says the man walked up behind her while she was putting groceries into her car.

"As soon as I pulled up he said something, and I jumped and I was like, ‘oh my goodness, you scared me,’” McGhee recalled.

She said he was not a big man and did not seem suspicious. She said he seemed like a normal man who needed directions. McGhee said when she told the suspect she couldn't help him, that’s when he pulled a knife.

“He told me to get in the car and I pretty much thought if I get in the car it’s probably not good, so I was going to try to do something, and my first instinct was to just try to grab the knife away from him," McGhee said.

Her snap decision was smart. Law enforcement officials say never let an abductor take you to a second location; the chances of surviving a violent crime drop dramatically.

Police say confronted by the spunky 24-year-old, the 33-year-old suspect ran, and hid on the roof of the shopping mall across the street.

It was a ladder attached to the back of the building that police say provided the suspect’s getaway, and the same ladder a canine officer found the suspect climbing down, which led to his arrest. 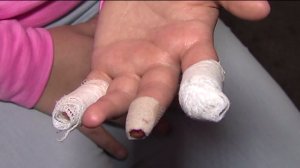 McGhee has injuries to three fingers on her left hand and some cuts on her side. She says this is nothing compared to what she fears would have happened to her if she had gotten in her car.

"I don’t know what his intentions were, if he was just trying to get money from me or was trying to take me somewhere else and do whatever, but I think he needs to serve time and think about what he did and hopefully never do it again,” McGhee said.

The suspect in this case has not been charged, so FOX 4 is not using his name, but he is sitting in the Johnson County jail on Tuesday night, being held on aggravated robbery charges. The suspect is no stranger to a jail cell, police say. He has a pretty decent rap sheet, including assault, drug charges and theft.