GLADSTONE, Mo. — A Texas woman convicted of killing a Gladstone psychiatrist who was having an affair with her husband, was sentenced to 20 years in prison, with eligibility of parole after 14 years, Friday afternoon in Clay County Circuit Court. 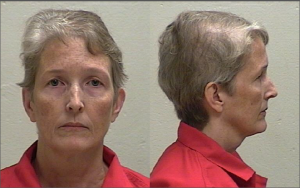 Shannon O’Roark Griffin, 55, was convicted of first-degree murder and armed criminal action in the death of Dr. Irina Puscariu of Gladstone three years ago. Jarrett Johnson, Griffin’s attorney says he’s grateful for the judge’s ruling, because he says it could have been a lot worse.

Puscariu was shot three times. Puscariu’s elderly mother told police the doorbell rang around 2 p.m. on Friday, January 13, 2012, and a woman came into the house and shot Puscariu three times. She later identified O’Roark-Griffin in a photo line up.  As O’Raork-Griffin drove away, she called her daughter and her husband to say she did what she had to do to protect him and others from this evil woman.

According to court records, Col. Griffin called police about the murder. He said he knew Puscariu was dead because his wife called to tell him she had killed his mistress.

In 2012, Puscariu’s ex-husband didn’t want to speak on camera but after the murder he told FOX 4 this is an “unspeakable loss and the biggest personal loss of his whole life.” He says “It has destroyed two families!” He also asked for respect for the families while they go through this tragedy.

Field of Bad Dreams: Why Kansas corn crops are struggling