KANSAS CITY, Mo. -- A Northland eight-year-old is going back to school this year a bit braver.

Kyla Lewis is only eight, but she’s already got her name on the cover of a book. The school project gave the bullied girl a platform, and she’s hoping it will help other kids.

“Willie the Bully and the New Kid Molly by Skye, Kyla, Angela, and Vicki," she said, reading the title aloud.

The cycle for Kyla started in kindergarten.

“I had lots of them. I've had them for three years," Kyla said. "They said, 'You're fat,' and ‘You're stupid,’ and they told secrets about me on the bus."

“Oftentimes, they're modeling what they've seen the adults in their life model,” Keck said.

As adults and caregivers, Keck said we should create a space where our kids feel safe and supported, not belittled or judged.

“Being bullied is a traumatic experience because it does change your self-worth," she said. "It starts to make you question who you are and how you fit in.”

Keck also said caregivers need to remember that what’s important to them will be received by their children.

“There's a lot of pressure to be the best in everything, and so children feel that anxiety," Keck said. "They feel that pressure, and then they start to turn against their peers at times because they don't know how to deal with all those feelings.”

Kyla’s personal experience allows her to give the following advice: “If you ever do get bullied, stand up and run to the teacher and tell them."

"I know how it feels to be bullied. I don't want other people to think that they're the only one. You'll just have to keep standing up," she continued.

Kyla said she isn’t as worried about bullying this year because her parents have taught her she’s confident and brave -- plus she likes her new teacher.

Eric Siley is the Chief Instructor at Self-Defense Global. His martial arts school teaching adults and kids how to be stronger and safer. He shared the following Anti-Bullying Blueprint with FOX4: 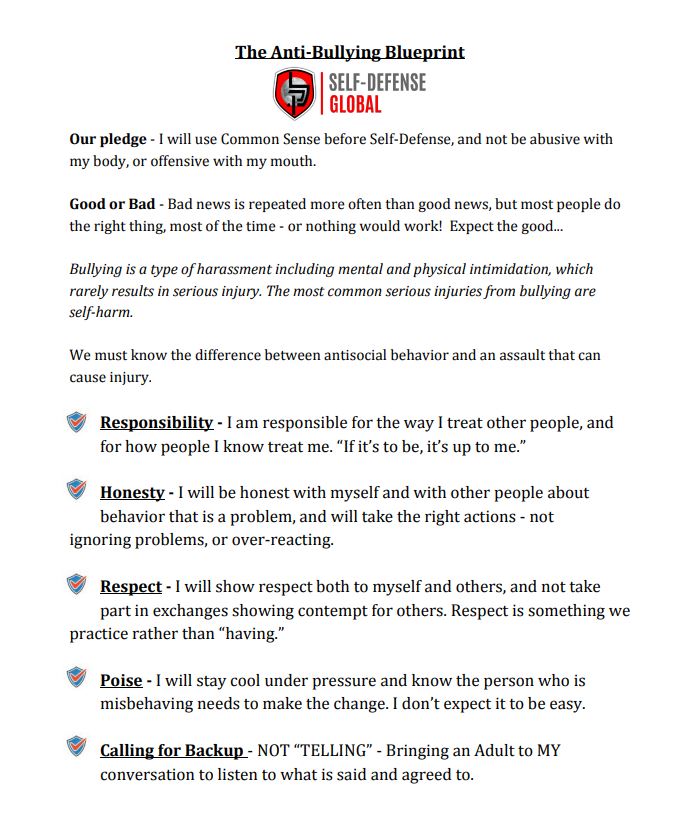 LEE’S SUMMIT, Mo. -- A staff member at a Lee’s Summit elementary school is instilling in kids that they can make a difference even at young age.

Hawthorn Hill Elementary is in one of the top 10 wealthiest zip codes in the metro, but Lorenzo Harrison wants students to know community is at the center of everything.