MAE SAI, Thailand — Twelve Thai boys trapped in a cave have sent letters to their parents, and for the youngest of them all, foremost on his mind is the prospect of a tasty fried chicken meal when, and if, he is finally rescued.

The letters were posted on Facebook by the Thai Navy SEALs who are leading the evacuation effort that involves pulling the boys through 2.5 miles of narrow, dark, twisting and flooded tunnels.

“Dad, Mom don’t worry about me,” wrote 11-year-old Chanin Viboonrungruang. “I am fine. Please tell Pee Yod (older female relative) to take me to eat fried chicken. Love you all,” said the boy who is known by his nickname Titun.

On Saturday CNN interviewed his father Tanawat Viboonrungruang, 35, who like the other parents, faces an agonizing wait. 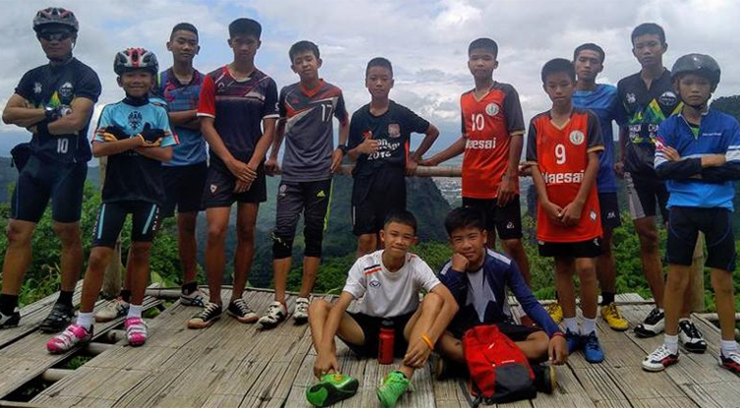 He explained the boy’s letter was referring to a promise made to the boy by his Aunt go to the local KFC.

In this video posted on Facebook by the Thai Navy seals, Titun is the fifth boy to speak.

When asked what his feelings were when he read the letter, he said: “I felt better as my son said that he was fine and strong. I felt relieved after I had been worried about my son that he would be exhausted. I felt better. But I don’t know whether is tired or not.”

“I am worried about him as there are obstacles to extract him out,” he said. “Everyone knows that it is difficult to stay inside (the cave) but the officials are trying. I hope he is still healthy and would come out soon. I want to send my support to him. I don’t have a chance to talk with him.”

Viboonrungruang, who has spent most of the past few days keeping vigil at the entrance of the cave, described his son as a friendly, lively, popular boy who dreams of becoming a professional football player and is a supporter of both Arsenal and Barcelona soccer teams.

“He’s been playing football since he was young, and he started it just at age 8 or 9,” said Viboonrungruang.

Titun joined the team led by the coach, Akkapol Chanthawong, also known as Eak, 25, who is also in the cave, two years ago.

“Back then he played football with friends just for fun. But after he joined this soccer team, his football skills are better. He performs really well with the guidance form the coach.”

He said Titun had said he was going training at a local football field on the day he went missing, but didn’t talk about the trip to the cave.

“I wasn’t able to contact him. So I tried to contact him again at about 6 or 7 pm but I couldn’t. I knew that they were trapped at around 11 p.m.”

He said he knew his son was among those trapped after a friend asked him to check a photo of the boy’s bikes and other possessions found near the entrance to the cave.

Viboonrungruang said the first days, when the boys had still not been located, were the worst.

“On the third or the fourth day of the operation, I was so stressed out worrying how he could live in the dark and damp cave because I don’t know what it is like in the cave,” he said.

“What could he do or what could he face? I don’t know. I was so stressed. So when the officials had announced that they found my son, I was so relaxed.”

He said for now the family were not preparing any surprises for the boy, if, and when, he is eventually returned to them.

“I don’t prepare for anything because after he comes out form the cave, he has to have his mentally and physically weak health checked and cured. So we don’t do anything for the surprise.”

But he said, in any case, his young son will be able to have anything he wants.