KANSAS CITY, Mo. — On the day before Thanksgiving, the Chiefs supplied us with some late afternoon breaking news. 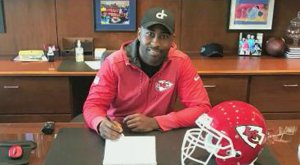 They had signed cornerback Derrelle Revis to a 2-year contract, and there’s a chance he might play this Sunday against Buffalo.

Revis, 32, for a number of years was the NFL standard. He hasn’t played at all this season but he said he’s been talking to the Chiefs since late summer. The Chiefs are getting him for basically nothing this season because the New York Jets are responsible for his contract.

It’s rare that Chiefs Head Coach Andy Reid comments on any players outside his usual availability times, but in this case he did.

“I’d think his role would be to step in and be a starter. That’s how I’d look at it. It might not be immediate, depends on how he does,” Reid said.

Revis was a first round draft pick of the NY Jets in 2007, and also played for New England and Tampa Bay.

“I think the reason for me returning is the fire that I have, the fuel that I have,” Revis said. “I’m excited about the signing that I have with the Kansas City Chiefs today. I’m joining their success. For both parties, it makes sense right now.”

INDIANAPOLIS, IN – The upcoming Fourth of July race weekend at the Indianapolis Motor Speedway will be run without fans, due to the COVID-19 pandemic.  IMS officials announced on Thursday.

Stage 5 of Indiana’s reopening plan allows for sporting venues to host public events with social distancing and is scheduled to begin July 4 in most counties.  However, Marion County – home to Indianapolis, recently entered Stage 3 of the road map 10 days after most counties.

KANSAS CITY, Mo. -- Chiefs training camp is moving from St. Joe to the team's practice facility near arrowhead this summer. The NFL issued a memo asking all 32 teams to keep travel to a minimum. So Chiefs fans add the summer trip to St. Joe to the cancellation list. The training camp experience is something most Chiefs Kingdom looks forward to each year. The team has used the facilities…

BRISTOL, TN – Sunday will mark the fifth race in 15 days for the NASCAR Cup Series.  The series wrapped up their stay at Charlotte Motor Speedway on Thursday night.

Chase Elliott capped a frustrating week Thursday night by picking up the win in the Alsco 500(k).  It was Elliott’s first win of the season and it locks down a spot in the playoffs for the No. 9 team.