KANSAS CITY, Mo. -- Throw a stone in Kansas City, and someone has a story about the last time the chiefs went to the Super Bowl. That includes Charles Wheeler, the oldest living Kansas City mayor.

"Ninety-three," said Wheeler, when asked his age on Friday afternoon. "I was born on August 10."

Of those 93 years, eight were spent as the mayor of Kansas City. Wheeler took office in 1971, a year after Kansas City became the home of the Super Bowl IV champs. A year later, the Truman Sports Complex opened near Interstate 70 and Interstate 435.

"I took a good deal of credit for the two stadiums," he said, "and when we approve the expenditure of monies and became major league, the world took notice of it."

"This is a great sports town," he added from his wheelchair at Bishop Spencer Place near the Plaza.

Obviously, he's a sports fan, especially of this Chiefs team.

Five decades ago, Kansas City also rose to the occasion. That's when the Chiefs won the Super Bowl in New Orleans.

"The city was excited about the Chiefs 50 years ago. As they were about the Royals recently," he said, "when we won the world championship."

"The crowds' behavior upon winning was ideal, just a huge parade," he remembered.

And when it comes to sports, Kansas City has taken on a new life since then.

"(Kansas City) was a sleepy little town and needed some awakening, and the Chiefs provided that awakening. Shortly after the Chiefs came the Royals. And now we have two wonderful teams and are ready to take on the world."

Eckard and the Jackson County Historical Society want a piece of it -- because right now, they only have one piece. 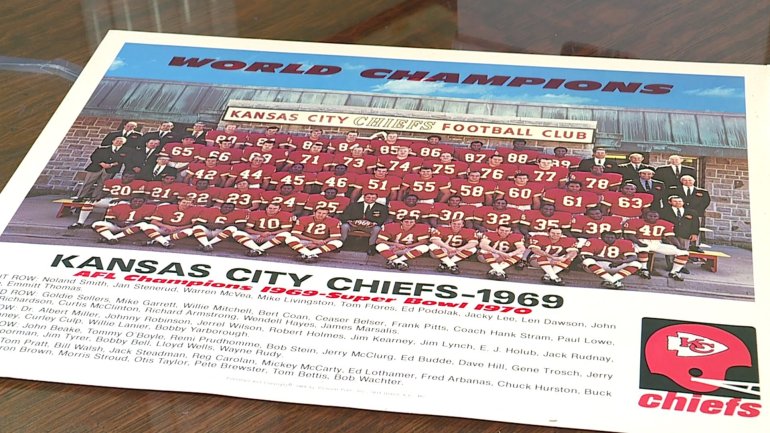 "We’re still collecting things that happened last week, last month, last year," Eckard added, "because that will be history in another 10, 20, or 30 years."

The group wants the public to donate -- or even just loan -- the organization a bit of the Chiefs' memorabilia.

"We can also take digital copies because it’s 2020," she said with a laugh. "We can scan it, high-resolution. We can make reproductions. As long as we have the image of it, we can take that. You can keep your program," she said.

Or your photo, or whatever else you may want to share, yet keep.

"I guess people don’t think it’s sports or history," she said with a shrug, "but it really is -- especially when it’s been 50 years since we’ve been to the last Super Bowl."

These days, Kansas City is about memories, memorabilia and maybe another National Championship.

On Friday night, May 15, there's a welcome party at Uptown Theater. Limited tickets are available for purchase by the public.

CANTON, Ohio -- The Pro Football Hall of Fame is commemorating the Chiefs victory in Super Bowl LIV with the clothes Andy Reid wore during the game.

A tweet from the hall of fame states the site just received Reid's hat, jacket and shoes. The clothing articles are set to go on display by the end of February.

Patrick Mahomes helped design these new Chiefs shirts. Here’s where you can get them.

PARKVILLE, Mo. -- Football season may be over, but you can still get your hands on new Chiefs T-shirts designed by none other than quarterback and Super Bowl MVP Patrick Mahomes.

The limited-edition T-shirts were produced by ultimate athletic sportswear in Parkville and are on sale at participating Hy-Vee stores.