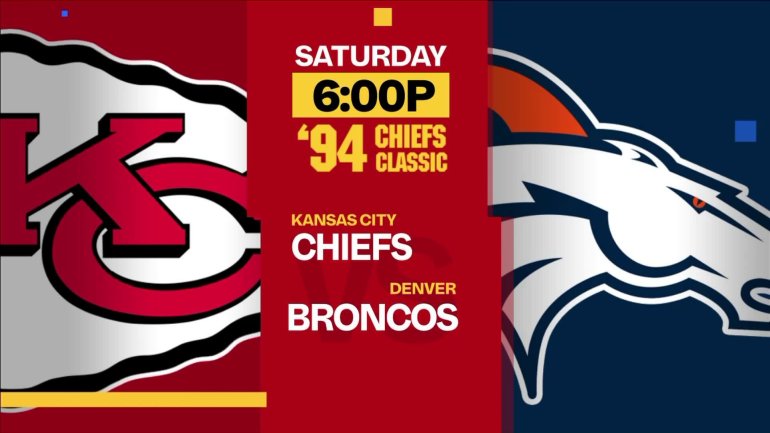 KANSAS CITY, Mo. — Coming off of a historic playoff comeback against the Houston Texans, and before a chance to go to the Super Bowl, FOX4 is showing a classic Kansas City Chiefs game to help you pass the time on Saturday night before kickoff of the AFC Championship Game on Sunday.

Tune into FOX4 at 6 p.m. Saturday to relive a thrilling late comeback win on Monday Night Football against the Denver Broncos on October 17, 1994. The game featured a showdown between two all-time great quarterbacks in Joe Montana and John Elway, with vintage moments provided by both, and a true Montana masterpiece at the end.

FOX4 also sat down with former Chiefs players to hear their stories and memories of the game, which we’ll begin featuring at 5:45 before showing the game at 6.

Epic! The stories you’ve never heard about game prep, halftime, and what it was like in the end, from the guys in the guys in the trenches. @chiefs @broncos #MNF #Throwback https://t.co/GigwUEU7nT

FOX4 also wants to hear your favorite moments and memories from the game. To join in on the fun and see what other people are saying, tweet using the hashtag: #FOX4ChiefsClassic

On Friday night, May 15, there's a welcome party at Uptown Theater. Limited tickets are available for purchase by the public.

CANTON, Ohio -- The Pro Football Hall of Fame is commemorating the Chiefs victory in Super Bowl LIV with the clothes Andy Reid wore during the game.

A tweet from the hall of fame states the site just received Reid's hat, jacket and shoes. The clothing articles are set to go on display by the end of February.

Patrick Mahomes helped design these new Chiefs shirts. Here’s where you can get them.

PARKVILLE, Mo. -- Football season may be over, but you can still get your hands on new Chiefs T-shirts designed by none other than quarterback and Super Bowl MVP Patrick Mahomes.

The limited-edition T-shirts were produced by ultimate athletic sportswear in Parkville and are on sale at participating Hy-Vee stores.